Strange Displays: The video screen with a motor in it 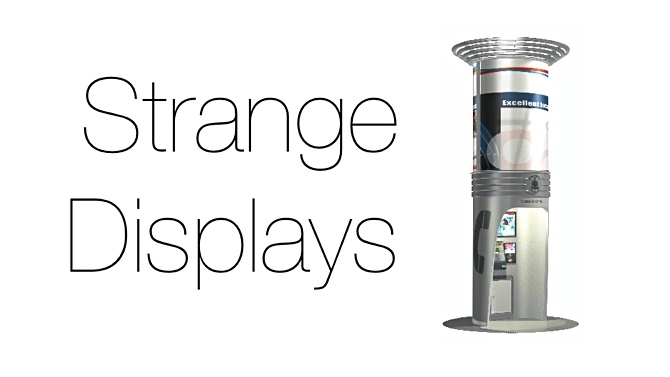 Some video displays are stranger than fiction. Here's the story of a screen designed to be installed up a lamp post, that spins 600 times per minute

Imagine a piece of string with a stone on the end. Swing the stone around above your head so that it moves in a circle. Now imagine a little light on the outer side of the orbiting stone. If you spin it fast enough, you'll see a continuous white circle.
Now, imagine that instead of just one stone and accompanying light, you have several hundred of them, all synchronised, so that they're in a vertical line, one above another, as they spin.
Now, when you look, you'll see a white cylinder of light.
Finally, imagine that these lights are individually addressable pixels, able to change to any colour, at any time.
What you have here is, essentially, a cylindrical video screen.

This is the basic operating principle of a type of display that you might have seen at airports or in ostentatious corporate foyers. I'm going to talk about a version of this which kind-of worked in the same way, but which took this novel technique to (and sometimes beyond) unheard-of extremes. I worked for a while a few years ago for a company called Litelogic. Based in the UK, their forte was doing unusual things with LEDs. And you couldn't find a much more unusual application for LED displays than their Rev 360 product, which, while it was no different to "standard" cylindrical displays, was actually designed to work up a lamp-post, in city-centre high streets.

The business plan was amazing. If I remember it correctly, it was something like this:
Litelogic's customer for the Rev 360s was an outdoor advertising company. They had billboards around the UK for advertisers who wanted a presence in the high-street. But they wanted something that would engage more eyeballs. Something electronic and digital.

What they wanted was a spinning video display on every lamp post, in wireless contact with a server, that would send video adverts according to time of day, and any number of other factors that would determine which advert would be seen and when. The advertising company would pay for new lamp posts, as long as they could have a video screen on them, saving the local government authority a huge amount of money.

Why would you want to do this, and not just use a big, flat screen?

Cost. You can't use LCDs in bright sunlight, so you have to use LEDs. But if you have to have an LED for every pixel, what you end up with is a very expensive screen. By spinning a smaller number of pixels to create a "virtual" cylinder, you can save money - and electricity: flat screens are expensive.

All of this was incredibly ambitious. Especially when you realised the problems that had to be solved.

How, for example, to you send a video signal to a display that is spinning six hundred times a minute? A typical DVI cable would get, you know, twisted, in a very short time.
The answer was to not have a cable at all, but to place the computer that was used to receive and play the video inside the spinning display.

Unsurprisingly, computers do not typically have their maximum spin-speed listed in their specifications, which is not too much of a problem as it is reasonable to assume that something with a hard disk in it probably shouldn't be spun at all.

But this didn't deter us from trying. We put a Mac Mini inside one of the Revs, and spun it up. Reliably, it stopped working well before the thing was spinning fast enough to give a decent video display. And each time, the hard disk was destroyed.

We tried Flash memory. At the time, nearly five years ago, SSDs were not only expensive (about four hundred pounds for 16GB) but pretty unreliable as well. The slightest hint of static electricity would turn them into paperweights instantly.

Eventually, we tried a small form-factor PC motherboard that accepted SSDs and CF cards for media storage. Amazingly, these small computers worked as well at washing machine spin-cycle speeds as they did when sitting on a desk.

We communicated with the Rev 360s remotely via 3D mobile technology, and the spinning computer talked to the Rev 360s base-station through WiFi. The whole operation was run through a web-based geographically-aware advertisement booking system that we designed called Litecast.

I have no doubt whatsoever that this was one of the most audacious and ambitious projects in the history of outdoor advertising. Rev 360s were delivered all over the UK, including a large number to Church Street in Liverpool - the main shopping drag.

Did they work? Yes. Definitely. Sort of. Sometimes. A bit.

The point about all of this is that it was little short of miraculous that they even worked slightly. If they had worked reliably, that would really have been a miracle; one that, unfortunately, never happened.

Imagine the magnitude of the task: maintaining a network of hundreds of motorised, spinning video screens, exposed to all weathers, all over the UK. It was impossible.
Eventually, because of this and other equally "ambitious" projects, the company failed, and I still have to remind myself occasionally that all of this really happened.

Here's an appropriately low-resolution video of the Rev 360 on a good day: