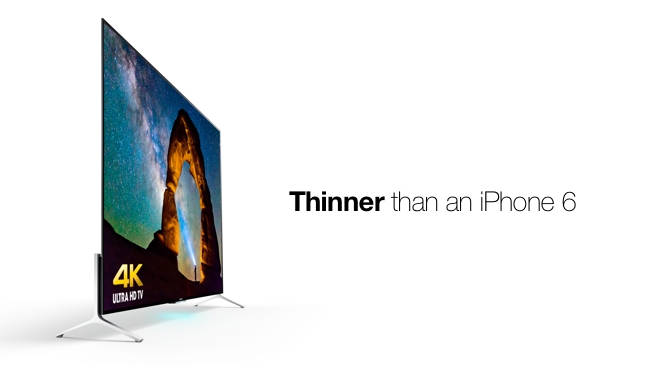 You simply have to be amazed at current consumer TV technology.

There's some great stuff going on with TV design. The move to 4K seems to have given a boost to the product designers to make their screens look good whether they're turned on or not.

And this is a very good thing, because, let's face it, modern TVs are big, and if something's going to dominate your living space, it's obviously best if it doesn't look too ugly.

4K TVs have been around for nearly three years now, and they have all looked pretty good. In fact, even the cheapest seem to have had some attention from designers. Ultimately, they're all rectangles (16:9 or in a very few cases 21:9) but there's an almost unbelievable amount of attention lavished on the (ever diminishing) bezels, the stands and the loudspeakers.

But the latest sets from Sony are breathtaking from a design point of view. In a sense, they're taking us back to 2D TV, but not in the way you might think.

The thing is that these sets are so thin that you almost can't see them edge-on. They're thinner even than that most lauded of thin consumer artefacts, the iPhone 6. (The iPhone is 0.27 inches and the Sony X900C is less than 0.2 inches)

You have to wonder how they stop them bending.

Sony has a trade mark for their new, thin TVs. It's "Vanishing Edge", which is true in a poetic as well a scientific sense.

Whichever way you look at it, this is an astonishing technical achievement. Remember that the first plasma TVs could be as much as six inches deep. Now, at last, we have televisions that you really can hang on a wall, just like a picture, except that a picture will probably be thicker.