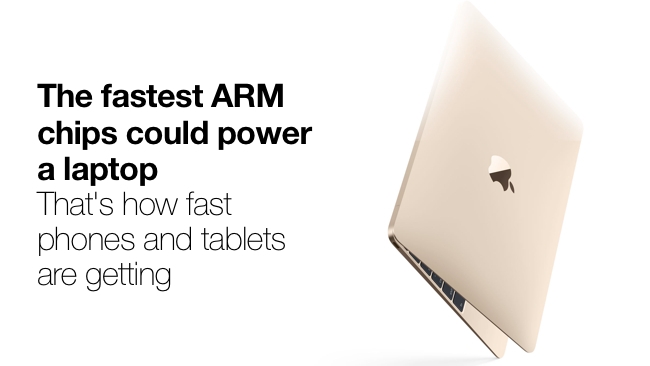 ARM chips could power a laptop

Proof that there is life beyond Vegas and NAB comes from speculation that we could see ARM chips powering laptops soon.

Every so often the technical press, including us, speculates that the next iteration of Apple laptops will use ARM chips instead of Intel ones. You can see why this would happen.

In the Apple world, the driver for this tricky change is perhaps that since Apple designs its own chips based on the ARM architecture, it would have control of the component that has the biggest influence on the performance of its laptops. There would probably be benefits from the sort of close integration between an operating system and an underlying CPU that no other computer manufacturer would have access to.

We've been wrong about this in the past - certainly in terms of timescales - and the proof of this is Apple's new, minuscule Macbook. It's the first Apple laptop that doesn't have a fan, and this is largely because it uses an Intel M processor - one that's designed for ultra-mobile use and which is usefully powerful without the type of heat generation that would need a fan to disperse it.

We read this very good review of the new Macbook on Ars Technica  - a very detailed and reliable source for computer tech, and noticed this:

"Another interesting thing to note, though we didn't include it on these charts: the MacBook’s multi-core CPU performance is nearly identical to that of the iPad Air 2. The A8X still has lower single-threaded performance—it needs a third core to match the dual-core Core M—but we’ve gotten to the point where top-end ARM chips and low-power Intel chips have very similar power usage and performance characteristics."

You can read the whole review here.

Make what you will of this, but this is the clearest indication we've seen yet that mobile phones and tablets are encroaching on general computing technology. There will be issues porting software across, but it's been done before, and nobody knows more about managing such a process than Apple.