Have we reached the end of camera innovation? We don't think so. 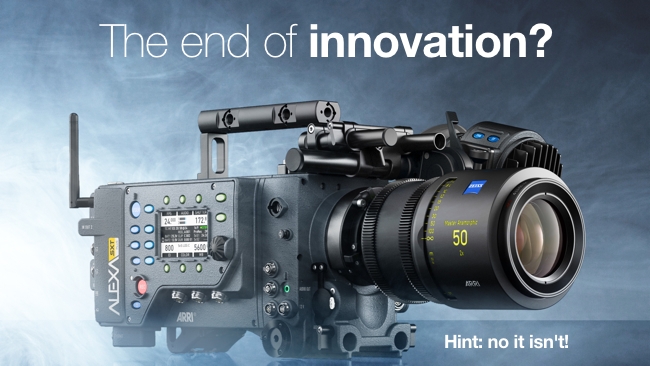 The end of camera innovation?

With the recent news that the new ARRI ALEXA SXT uses the same sensor as its prececessor, we ask whether innovation in cameras is slowing down

With new camera models seemingly cascading into the marketplace, you might think that there’s never been a more fruitful time for camera innovation, and in some ways, that’s absolutely right. It’s now well established that the growth in technology is approximately exponential - which is to say that any particular aspect of it tends to double in a given period rather than grow linearly.

But there is also a side effect of this which we may be starting to see now. It’s the problem of what happens when everything is good enough, to the extent that further improvements aren’t necessary?

It’s perhaps easiest to understand this by looking at smartphones, which have been on a similar, if not even steeper, trajectory than cameras in recent years.

The changes in smartphone capability since the original iPhone have been explosive. The current iPhone is more than fifty times faster than the first of its genre. In some ways, it needs to be, because the iPhone’s screen resolution has mushroomed to the point where the iPhone Six Plus has a full HD display. Some Android phones have even higher specced screens than this.

This is hardly a problem if you’re a consumer, but it’s an issue if you’re a manufacturer. Because it makes the question of “what do you do next?” very tricky indeed.

This is why we have the Apple Watch

And that, I suspect, is why we have the Apple watch.

Now, I have absolutely no doubt that the Apple Watch is a superb piece of hardware and software engineering, but what I do doubt is whether I - or many other people, for that matter, actually need one. My own view on this is that the myriad of things that you can do with the Apple Watch don’t add up to a compelling enough reason to buy one. I’ve stopped using a watch because I carry my phone with me all the time and, you know what? It does everything that a watch could do but better. It’s got a bigger screen, longer battery life, doesn’t depend on my carrying some other Apple product for it to work properly - and so on. That’s just what I think - huge sales of the Apple watch will most likely prove me wrong about whether or not people want it, but I am unconvinced about it necessity. You could almost say that Occam’s Razor could apply here.  http://en.wikipedia.org/wiki/Occam%27s_razor in a rather hardware sort of sense.

I think we’re seeing signs that our current round of technology, at least in some areas, is now good enough that innovating beyond the current status quo is proving to be difficult.
Camera manufacturers are going to face the same sort of problem, but there are more solutions for them, perhaps, than there are for smartphone manufacturers, because the two marketplaces are very different. Smartphones are driven by fashion as much as utility, while cameras are worktools and have to meet very specific criteria in a number of different roles.

So, while it may be true that we seem to be settling on 4K APS-C or Full Frame sensors (apart from the “traditional” 3 sensor camcorder market) there is a huge variation in the way these cameras are conceived and put together. Just look what’s out in the field right now:

The Sony A7S: A mirrorless DSLR-style camera with 4K output (but not internal recording) and phenomenal low-light performance.

The Blackmagic URSA: A chunky, modular 4K camera system that oozes functionality and is designed for larger production teams.

There’s plenty of room for variation on these themes and I have no doubt the manufacturers will be exploring these avenues, ready for announcements at upcoming tradeshows, but they will not have an easy task, because, very largely the question of picture quality is nearly settled.

Now that’s a rather sweeping thing to say, given that of all the things that matter with a camera, how it looks is by far the most important. So let’s have a closer look at what I mean by this.

You can't buy a bad camera

It’s getting increasingly hard to buy a camera that doesn’t give a good picture in good lighting. Some cameras will work better in low light. Others give glorious images in good light. You can’t buy a camera today that doesn’t give a good image in quality lighting conditions. In that sense, we’ve reached the end point: there’s no need for a better picture.

I do suspect we will see improvements in the algorithms that are used to decode the picture from the sensor and output it as a picture with proper colour. Decoding the pattern of colours from a Bayer filtered sensor is pretty complex and there is plenty of room for improvement. In fact the true resolution of Bayer pattern sensors tends to be glossed over, because the only true resolution of such a sensor is a monochrome one. With less than one pixel per colour, the actual output resolution is inevitably significantly less than the raw number of pixels would indicate, but with better algorithms, it’s arguable that resolution can increase beyond what is currently achievable. We’ve already seen this type of progress with the Sony F65, a camera with a very high resolution sensor. Recent improvements in Bayer processing mean that even with archived raw footage from an F65, the quality can be improved, bringing the decoded resolution from, say, 4K to 6K.

Of course, this won’t be the end of comparisons about picture quality. There are still enough variables to go round. Every sensor size will require its own optics and then for each size, there’ll be a variety of resolutions. And each of these will need its own colour science to optimise the output, which is to say that the quality will remain subjective. So it will still be absolutely necessary to try out new cameras to see if you like the picture.

But at the very least, there shouldn’t be any cameras, ever, with a bad picture, or even one that isn’t quite good enough. From now on, any camera that isn’t in a smartphone and that isn’t pitched at consumers should be capable of at least a decent professional picture.

Given that, it opens up the opportunity for camera makers to focus on the other aspects that make a good camera. Ergonomics, where the controls are, interchangeable lens mounts (perhaps) and exploring every variation of size and weight.

So, perhaps the fact that cameras can potentially all be as good, is the point at which they can start to be even better.