Video processing and standards conversion, Part 4: Using it in the real world 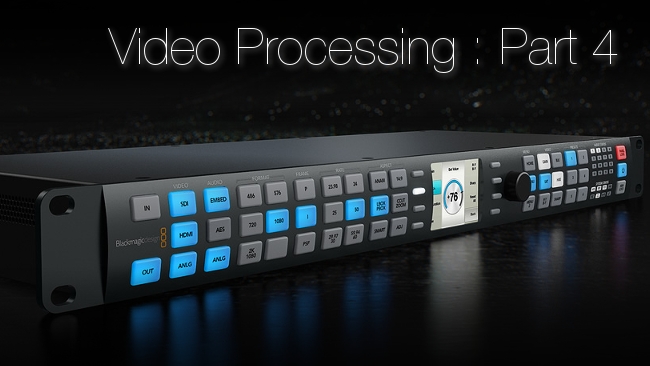 In the conclusion of our four part series on video processing and standards conversion, Phil Rhodes examines how key concepts are applied in real world examples.

Standards conversion, as we've discovered throughout this series, is a field which has gained enormously in sophistication since media production became almost entirely digital. Fine as all this technology is, though, like everything, it exists only to be incorporated into products that can serve users and do useful work for people. Our purpose today, then, is to look at exactly how the techniques we've discussed - optical flow, resampling and other things - make a difference in the real world.

Given the global reach of certain big brands and their advertising, there's clearly a huge requirement to create versions of material in different formats to suit local television systems and, now, web deliverables, too. Someone with almost as much experience in the field as it's possible to have is Craig Russill-Roy, who started out with Channel 7 in Australia in the early 90s and therefore became involved at exactly the right time to witness enormous changes, both in terms of the globalisation of this type of media and the move to file-based delivery. "One of my bosses started a company called AdStream," he says. "They were taking digis [digital betacam tapes] and the idea was to ingest them and send a file to the broadcaster. We started to roll out regions worldwide - South America, Australia, through Europe." With such a wide reach, conversion and standardisation concerns quickly followed. "This was standard definition 625 line, maybe 16:9. Everyone used to put it into a Snell & Wilcox, sometimes you'd put it into the Flame and do something. Everything to the edge of technical correction, without getting creative." As the industry moved from almost exclusively tape-based storage and SDI interconnections to file-based workflows, requirements grew. "We started getting more clever and broadcasters started wanting direct files compatible with Omneon, GXF, Grass Valley, all that stuff."

Perhaps inevitably, internationalisation became a prominent issue. As an explicitly file-based process, we might most obviously have expected to see file-based standards conversion, but to this day, quality remains a problem. "The file conversion was not there yet, the algorithms were not right. A lot of people were doing either slow PAL or hold frames and they would fail
quality control," said Russill-Roy.

Slow PAL refers to the technique of treating 25fps PAL material as 24fps film-originated material, and applying the established 3:2 pulldown technique, as had been used to transfer film to NTSC video for decades. The result is a 30fps (or more properly 29.97fps) video stream representing the PAL original, although the slightly longer running time can complicate television commercial production. Results with interlaced source material be unpredictable and unpleasant artefacts can occur at cuts. Even worse, though, is the simple technique of duplicating frames, producing an identifiable one-per-second hesitancy to motion that is only really suitable for offline editing - and even that's no longer really required, given the ability of computers to work natively in almost any frame rate.

"One day," said Russill-Roy, "I get yanked into an office and our new business guy is saying there's a certain high end movie company, and what they want to do is take their 23.98fps trailers and convert to 1080i, at 50, 59.94, letterbox, PAL, NTSC, you name it. So we had to create the six formats, and movies are sensitive, they need to get through." Existing solutions were less than satisfactory. "People were using Episode, FlipFactory, but the interlacing was a big issue." Eventually, the only solution which would satisfy the big studios was a real-time hardware converter: the original Teranex. "We jumped in on the $79,000 version which plummeted to $29,000... now it's become three grand."

Bang for your buck

With such affordable equipment on offer, installations across multiple sites, offering multiple channels of conversion, became a realistic financial proposition. "We had an office in Miami and in London. [For each] we purchased six Teranex, six Hyperdeck Studios, the 17" SmartView monitor and one of those fantastic duos that can do waveforms and vectors, the audio monitor, and stuck it into a normal rack. Hanging off this would be an iMac and some Promise storage, then we went on to GP Labs because there was so much data." With Final Cut 7 as the initial tool of choice (thanks to its multichannel audio support), this configuration represented an enormously powerful conversion suite capable of six simultaneous real-time transcodes to various formats.

The attraction, however, was not just the price tag or the speed. Quality standards conversion of continuous, uncut camera-original material is now very possible given optical flow, high quality resampling, noise reduction and, of course, the electronics to do it quickly. Converting material with cuts in it - an elementary complication, one might have thought - is something that's still done incorrectly on a wide basis.

Optical flow, being dependent on detecting a meaningful sequential motion between adjacent frames, fails badly on cuts, producing unpleasant flash frames of warped and partially-dissolved images as the algorithm struggles to match motion, desperately outputting the least-worst solution, even where there is no meaningful motion to match. Teranex, on the other hand, performs cut detection on incoming material and treats each shot independently. "Everything else is mashing together on cuts. Some other products can do clean cuts, but only on progressive material. You start seeing flash frames between scenes and it just looks awful." Although standards conversion is intrinsically an imperfect process, separating the incoming material into discrete shots allows things to work much more effectively.

With the test and measurement features of the SmartScope Duo, Teranex's other features, from those of a simple processing amplifier to noise reduction, can also be effectively deployed in a bureau service which must be able to produce the best possible results from incoming material that can sometimes be of rather dubious vintage. The Teranex name, backed up by engineering talent from the original company, seems likely to remain entrenched under Blackmagic's ownership. With the technology now very available, the concern becomes one of expertise. Those confronting issues of standards conversion, including the delivery of files with subtleties such as subtitles, captions, multiple soundtracks, specifically designed VT clocks and the other unavoidable minutiae of current broadcast delivery practices, can find free information on the subject from Craig at www.delivercommercials.com.