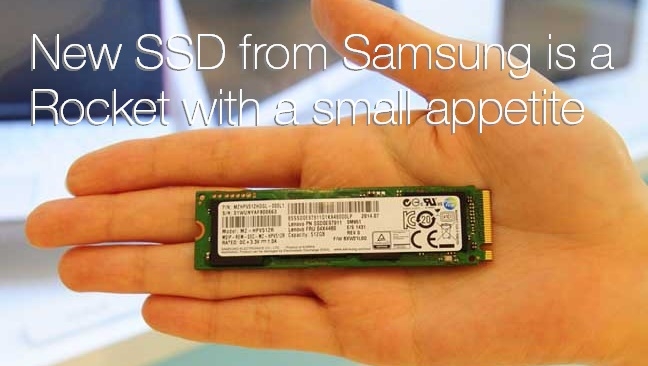 Samsung's new SM951 SSD drive is designed for the next generation of Ultrabooks with read speeds up to 2.15GB/s, but draws a mere 2mW of power in standby.

The SM951 is a super-slim device that fits M2 slots in a Laptop or Ultrabook. Measuring just 80mm x 22mm and with a weight of just 6 grams it is far smaller than a standard SSD drive: perfect for mobile devices. It is available in 128GB, 256GB and 500GB capacities.

As well as the blazingly fast speeds the SM951 is also very power efficient, using less than 50% of the power of the previous generation when in operation. But when it really shines is in standby. It is the first SSD drive to adopt the L1.2 low power standby mode as defined by the PCIe standards body. By embracing the L1.2 level of standby operation, the SM951's power consumption is drastically reduced – to under 2mW, 97 percent less than the 50mW consumed using an L1 state. This will allow computers to remain in a dormant state for long periods without running down the battery, but to wake immediately when required.

Initially the SM951 will only be available to manufacturers but hopefully later it will be available as an upgrade to your existing machine.

You can read the full press release after the break.

"We are helping to accelerate growth of the ultra-slim notebook PC market with the introduction of this energy-efficient, high-speed PCIe SSD," said Jeeho Baek, Senior Vice President of Memory Marketing at Samsung Electronics. He added that, "We will continue to introduce next-generation high-density SSDs with improved performance and increased differentiation, as we further strengthen our business competitiveness in global SSD market."

The SM951 boasts outstanding performance, supporting both PCIe 3.0 and PCIe 2.0 interfaces. For use in the latest ultra-slim notebooks, it can read and write sequentially at 1,600MB/s (megabytes per second) and 1,350MB/s respectively based on PCIe 2.0. This performance level is approximately three times faster than that of the latest SSD with a SATA interface and about 30 percent faster than that of the Samsung XP941, its predecessor. In addition, the new SSD's random read and write speeds reach up to 130,000 and 85,000 IOPS (inputs/outputs per second) respectively.

For ultra-slim notebooks and workstations wanting to adopt the PCIe 3.0 interface, the SM951 can read and write sequentially at 2,150MB/s and 1,550 MB/s respectively, which would provide approximately four times faster sequential reading performance compared to current SATA SSDs. With a PCIe 3.0 interface, the drive achieves substantially higher energy efficiency, requiring only about 450MB/s per watt for sequential reading and 250MB/s per watt for sequential writing, which translates into a more than 50 percent of improvement in performance per watt over that of the XP941 SSD.

In addition, the SM951 is the first SSD to adopt the L1.2 low power standby mode (which allows all high-speed circuits to be turned off when a PC is on sleeping or in hibernation) as defined by PCI-SIG (the PCIe standards body). By embracing the L1.2 level of standby operation, the SM951's power consumption is drastically reduced – to under 2mW, about a 97 percent decrease from the 50mW consumed using a L1 state.

Samsung's SM951 comes in the M.2 form factor (80mm x 22mm), which is only about one seventh the size of a 2.5 inch SSD. Also, it weighs approximately six grams. The drive's compactness is well suited for most notebook PC designs, freeing up space for other components including the battery. The SM951 lineup consists of 512, 256 and 128GB SSDs.

With its SM951 and other Samsung PCIe SSDs using a 10-nanometer class** MLC NAND flash production platform, Samsung believes it is in an excellent position to rapidly expand the global PCIe SSD market. Samsung will also work on timely introduction of next-generation PCIe SSDs that support the NVMe*** interface, which will provide even further performance increases.