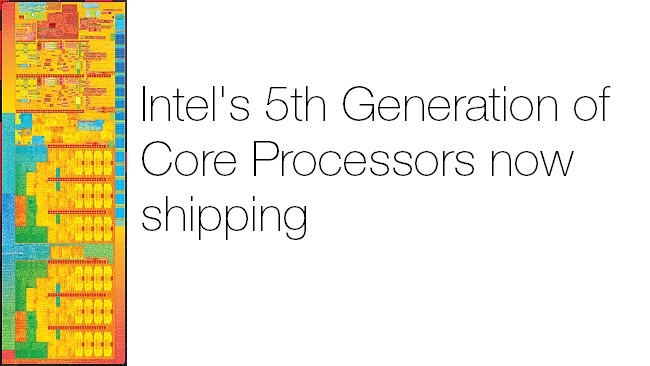 Intels i3, i5 and i7 Core Processors are found in most of the Laptop and Desktop computers we use today and they are now shipping the 5th generation with improved performance, longer battery life and some interesting new technologies for human-computer interaction.

There are 14 models of the new processors, all manufactured using Intel's new 14nm technology, with 35% more transistors on a 37% smaller chip. This allows greater performance but with reduced power consumption. Compared to the previous generation of Core processors they will have up to 24% faster graphics performance, up to 50% faster video conversion and typically up to 1.5 hours longer battery life. If you compare this new generation to the first Intel Core processors you see graphics performance up to 12 times faster and up to twice the battery life.

The new Core processors have faster Graphics built-in, with models featuring the HD Graphics 5500, HD Graphics 6000 and Iris Graphics 6100. There is built in decode support for UHD Codecs such as VP9 and HEVC and support for Direct X 11.2 and Direct X 12 to support the latest games. They also feature support for OpenCL 2.0 and OpenGL 4.3 so software that uses GPU acceleration should be able to take advantage of this.

The new family of processors will also support a new technology called "Realsense", using cameras and microphones to allow the computer to respond to voice and gestures. Computers can be fitted with a combination of Video Cameras, Infra Red Video Cameras and Infra Red Projectors that will allow the computer to "see" in 3D space. This will enable simple 3D scanning of faces and objects and the ability to control games and other software with hand gestures. You can see more about this on Intel's site here.

Intel have launched a marketing campaign using Jim Parsons, who plays Sheldon in the Big Bang Theory, to promote the new capabilities of Realsense equipped computers and tablets.

Intel also announced a new family of processors aimed at mobile devices, codenamed "Cherry Trail", these will also have support for Realsense and increased performance with reduced power consumption.

You can read Intel's full press release after the break

Intel also started shipping its next generation 14nm processor for tablets, codenamed “Cherry Trail”. The new system on a chip will offer new user experiences such as Intel® RealSense™ technology, no wires, no password and Intel® Context Aware™ technology capabilities. New products based on “Cherry Trail” will be introduced starting in the first half of 2015.