LG monitor puts you literally in front of the curve 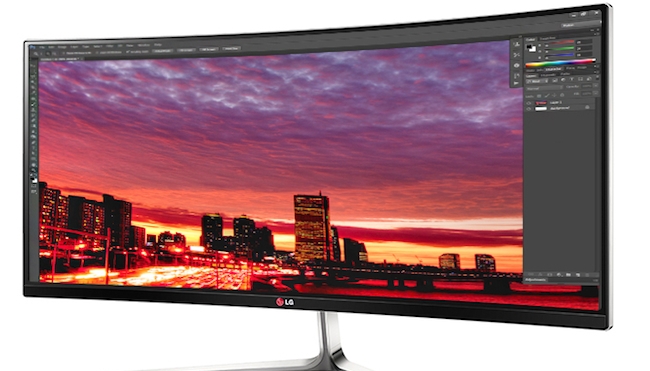 Sponsored article: As anyone that’s ever tried to use a monitor over 27-inches will know, that extra screen real estate comes at the cost of lots of neck craning and subtle shifting of your position. LG’s elegant new 34-once 21:9 QHD display though seeks to change that by adding a curved screen into the mix.

In many ways this is the perfect application of a technology that has already been developed for, but is probably only going to be an evolutionary curiosity in, the TV market. There, curved screens tend to exclude the viewer; leading to a single sweet spot for an admittedly spectacular picture that can only be occupied by one person at a time. All of which is what makes the application of curved space and time absolutely perfect for the computer user.

The LG 34UC97 is a 34-inch, 21:9 ratio IPS monitor with a — literally — eye-catching QHD resolution (3440 x 1440). Now, while this is 9,792,000 less than Apple’s latest 5K iMac, arguably these ones are more usefully arranged in that you can run multiple windows in a linear fashion: a nice hark back to the multiscreen displays a lot of us ran before Mavericks broke them for us.

The monitor is more than just a collection of curved pixels though and a curvaceous update of LG’s existing 34-inch flat behemoth, as technically it’s an extremely capable beast in other areas too. A specially developed multi-port on the centre back of the monitor allows users to centralise all the connections for other devices —whether they be cameras, scanner, or speakers — via a mixture of two Thunderbolt 2 ports, two HDMI connections, two USB 3.0 ports, and, for good measure, a DisplayPort.

For Mac users running Yosemite, the 34UC97 features a handy 4-screen split function, while those two Thunderbolt 2 slots allow for daisy-chaining data storage devices through the monitor and thus taking advantage of data transfer speeds of up to 20Gbps — four-times faster than USB 3.0. Less cables and a significant speed hike? Can’t be bad.

And the tricky problem of colour shifting taking place in the corners of the new breed of extremely wide displays is addressed both by the IPS panel technology and by what LG stresses is ‘the ideal curve’.

It’s in everyday usage though that the monitor really shines. Even just fritzing around with a few web pages and social media you get the feeling that you could launch the space shuttle or hold the world to ransom if you really wanted to; ramp up the creativity and start driving all that real estate (audio work, video editing — anything with a timeline basically) and it really feels like you hold the whole totality of the project in view. And as an entertainment experience it’s hard to fault, especially for gaming.

It’s still early days for curved screen technology, but there’s a growing sense that large, curved computer screens in particular are a technological wave with something of an inevitability about them. And with the 34UC97 LG has certainly made a good fist of kicking it all off…