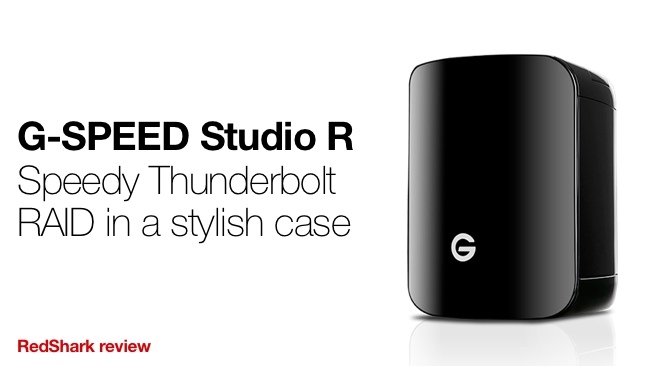 We've bee testing the G-Tech G-SPEED Studio R, which is a desktop Thunderbolt raid system, with styling sympathetic to the Mac Pro, but which can, of course, be used with any computer supporting Thunderbolt. Tom Salisbury reports

Once I had the G - SPEED Studio R cabled up, a simple and easy job, powering up the drive was straightforward. Like most people with a new drive I went straight to website to download software to configure and update the system (although you can use system straight out the box).

Installing and configuring the drives was a breeze on my Mac Book Pro. A helpful wizard allowed for a novice to blast through without having to read a manual, or for a more technically-able user who could smoothly configure the drive into more robust reliability setting.

Once the storage side was all set-up I took it upon myself to give this drive station a thorough stress testing.

I moved my windows VM (Virtual Machine) onto the drive and pointed my vm software at its new location.

I was running a windows VM with Avid Media Composer 7 installed and now got to see how this compared to running against the VM on the Mac's SSD itself.

I was pleasantly surprised with the data speeds received from the drive (remember this is in a RAID 5 configuration).

In the middle of creating some new videos clips I decided to test one of worst failures a editor can experience: a drive dying while you're using it.

So I unplugged the drive while the system running and happily I can report that the system carried on as I would expect with no sign of performance impact.

Now was time to see how the drive station held up under fire of still running all my software while bringing the unplugged drive back in,

So much like earlier while still running I simply plugged drive back in, and was impressed that I didn't receive too much of a performance hit. It's normal for a raid rebuilt to take some drive speed performance away and I did notice some but no where near enough to stop my NLE.

Honestly if I didn't know what was happening in background I would have just thought that system was reaching a more complex part in in my project rather than there being a performance decrease on drives.

One of the most basic but useful features about the G studio is the LED on the front. From my earlier test I had a few coffee breaks between digitally trashing the system, and while walking back to my desk,
I noticed the standard white light had changed to amber. Loading up the trusty G Speed software the system pointed out that the amber light was due to system performance degradation as the raid rebuilt itself.

This is exactly the kind of alert I like in a storage solution something: that draws your attention while allowing you easy access to find out the cause.

So, here are the plus points of the G-SPEED Studio R:

This has got to be one of the solid selling points of the unit in my eyes, The unit has kept up with my demands and at time pleasantly surprised me with its general performance.

I do enjoy the simplicity of navigating the device menus, to configure the unit how I prefer, from power management, to raid set up this was simple and easily done without having to refer to a manual at any point.

Using some high level Hitachi hardware inside meant even with me thrashing the system it still reliably kept working time and time again.

The design of the G - SPEED Studio R is very in keeping with the recently redesigned mac pro and certainly would fit in any mac work environment.

There were some negative aspects but most of these are simply due to the speed and effectiveness of the device:

Compared some other storage devices this does take up more space in work environment but nothing the average desk can't handle! I myself have a G - SPEED Studio R tucked behind my monitor quite happily

When they're under load, the drives can be quite noisy. But that's because they're high performance drives.

Per TB, these drives are more expensive than alternatives. But that's because you pay for speed and reliability. In my view, it's worth paying for.

I've tested the G - SPEED Studio R with a solo workstation and it is a nice piece of kit with great reliability for drive usage. It's impressively fast, and, overall, it's exceeded my expectations.