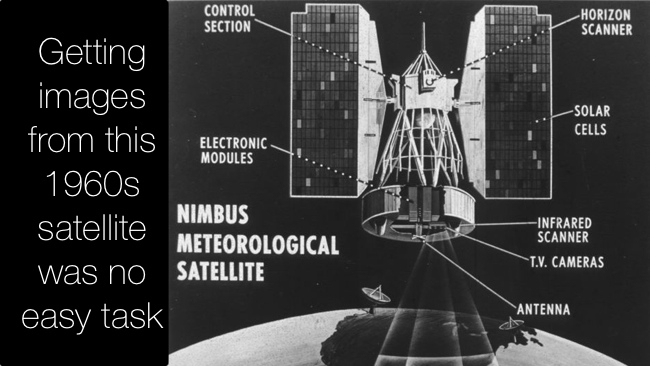 In a heroic feat of dark data analysis, two climate scientists from the University of Colorado have rescued 50-year-old images from Nasa's Nimbus 1 satellite, the first ever Earth observation mission.

One of the key tasks in analysing and understanding climate change is data mining and seeing exactly how the Arctic and Antarctic ice-sheets have changed over recent years. The modern satellite record is widely considered to have begun in the late 1970s, so finding information that pre-dates that is a bit of a goldmine. Indeed, the images unearthed by David Gallaher and his colleagues from CU include the oldest known satellite image of Europe and even a glimpse of the Aral Sea drainage basin between Kazakhstan and Uzbekistan back when it was still full of water.

Not that there images were easy to get hold of and then use, oh no. 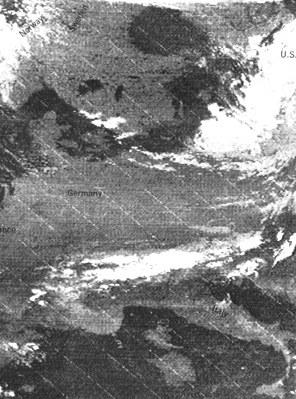 Gallaher is technical services manager in the National Snow and Ice Data Center (NSIDC), which is part of CU's Cooperative Institute for Research in Environmental Sciences, and in 2009, he saw a Nasa conference poster stating that old film from the Nimbus 1 satellite had been found in a secure storage facility in North Carolina.

Nimbus-1 launched in 1964 and was the first of a series of seven Nasa satellites which pioneered earth imaging technology in grainy black and white. The images potentially dialled the satellite record back by a full fourteen years and, much to Gallaher’s delight, Nasa said he was welcome to them…he’d just have to sort through them himself.

According to the Barents Observer which broke the story, the material turned out to be 25 boxes full of tins containing several thousand 60-metre rolls of photos, not to mention quickly-deteriorating magnetic film with infrared imagery. What was worse, it was all unopened, and labeled with largely useless information on orbit numbers rather than anything actually useful like location and orientation data.

And, even worse than that, in a classic 60s technology kludge the visible light images weren’t even the originals. In a mirror of what would happen five years later with the Apollo moon landing footage, to record them for posterity at the time Nasa technicians had simply played the images on a TV monitor and taken photographs of the result.

Quebec-based company, JBI, rescued the infrared data for $10 a spool and Gallaher started printing out the visible images himself. By the end, he had over 200,000 images which the team then stitched together using standard software once they had checked that longitude and latitude were correct.

Gallaher refers to what the team has unearthed as “the Precambrian of satellite data”, and some of the findings have already proved to be remarkable, such as observing both the largest and the smallest extents of Antarctic sea ice ever recorded, just one year apart. Other researchers are pouring over the publicly available datasets now too, and Gallaher’s been revved up enough by what he’s found that he’s hoping to set up an an organisation to recover more dark data — material languishing in out of date formats on obscure and obsolesent equipment — if he can raise enough money.