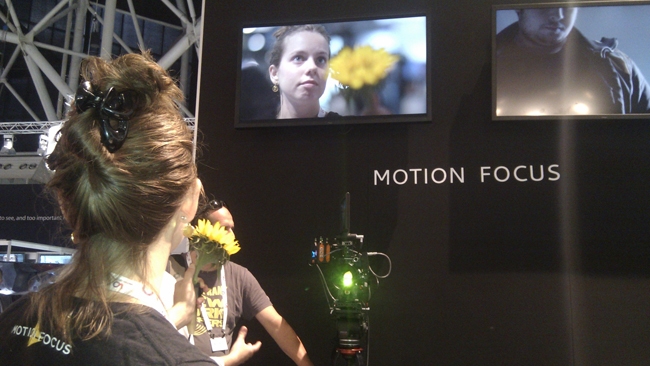 What do you get when you couple a magnetic motion capture system with a remote focus pulling system? Something like Cinema Control Laboratories’ Andra motion focus system. Phil Rhodes is intrigued.

One of the things that's most entertaining at trade shows is to walk around looking at the very smallest booths, because that's where all the craziest, or perhaps we should say most interesting, ideas turn up. The big releases can overshadow this sort of thing with lots of repetitive coverage and that's often a shame, so my purpose here is to elucidate some of the things you can often only find by actually attending the show.

A particularly entertaining example at this year's IBC is Andra's the experimental Motion Focus system. Put briefly, it's an application of the techniques used in motion capture to produce a pinpoint-accurate focus distance on an arbitrary object (such as an actor), which is then relayed to a conventional focus motor.

The displayed implementation used magnetic motion tracking, and, as such, it's presumably subject to all the problems of magnetic motion capture, which uses emitters producing a pulsed magnetic field which are then detected by coils on the object to be tracked. It's a nice technique in general because the tracking device incorporates three coils at right-angles to each other, meaning that both position and orientation can be detected from a single sensor, whereas optical tracking requires a dot at the ends of each limb to work out which way the bones are pointing.

This benefit isn't important for focus tracking, since in that case we only care where something is in three-dimensional space, as opposed to where it's aiming. The other advantage of magnetic tracking, however, is pretty key: unlike the reflective-marker approach to motion capture, the tracking points don't need to be visible. Magnetic fields pass unhindered through most objects (although they can be disturbed by large collections of ferrous metals and electrical cables) so the marker can be invisible. This is a huge positive when using magnetic motion tracking in its original scenario, because there can never be a time when too many markers are invisible to get a decent result as can occur with optical tracking.

There are other issues associated with magnetic tracking which affect its use for critical focus work. Particularly, it's notoriously short-ranged, and at present the system supports only a single field emitter. Probably that's fixable, in time. Otherwise the downsides are largely the same as any magnetic positioning system – there's a need to plot out the space before use, making it slightly time consuming to set up, and the tracking markers are not just scotchlite-covered balls, as they are in optical tracking, they're active electronic devices with a power supply, circuitry, and a datalink back to the base station.

In essence, then, this is a reapplication of existing devices, with a bit of software inbetween, but it's not too difficult to imagine a heavenly future (or a nightmare future, if you're a focus puller) in which entire sound stages are rigged for magnetic capture and we simply place markers on the objects we want in focus and select between them at the appropriate moment.

The company is at pains to be clear that it has no intention of replacing focus pullers – nothing like this ever really can. Pulling focus is an art and one that can have impacts as deep as telling the audience where to look, so nobody's seriously contending that it can ever be entirely automated. What's more, the most taxing focus work is often on long lenses, in large spaces, where magnetic motion tracking might struggle to cover the distance. Even so, this sort of thing is a welcome development for specific circumstances, and certainly makes time-pressured situations easier. Anything that can help a blown take become a usable one is useful, but this can do much more than that.

Pre-orders are now being taken with package prices starting at $12,750 for a DSLR kit giving a performance envelope for a single performer of roughly 16 feet.