Sony F5 gets 4K internal recording without a hack...for a price 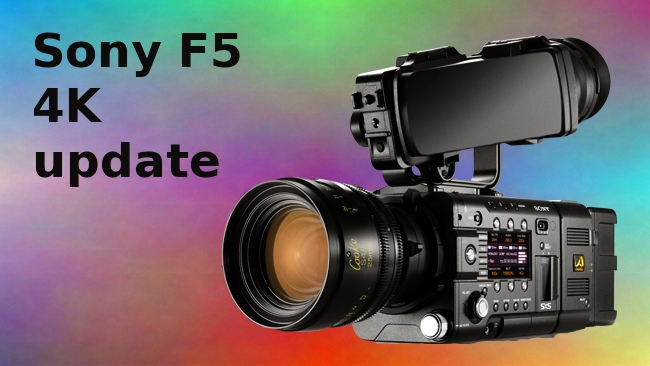 Perhaps in response to the recent Sony F5 'hack' (or perhaps not; who can say?), Sony has announced that it will now be offering a software only 4K recording upgrade for the Sony F5, in addition to its full Sony F5 to F55 hardware upgrade.

Sony F5 owners have long wished they could record 4K internally on their cameras, as is possible on the Sony F55, but despite the clamour for a firmware update to enable this, it has, until now, not been forthcoming. A hardware upgrade to the same capability as the Sony F55 had been announced previously, but Sony has just announced a software upgrade too, albeit with more limited capabilities.

The much demanded software upgrade allows the F5 to record 4K internally to memory cards in Sony’s 50Mbps 422 XAVC codec, instead of requiring the external AXS-R5 RAW recorder to record in 4K. The software upgrade is license key-based (SKU no: CBKZ-55FX) and costs $998. You will be able to install the upgrade yourself, instead of having to send the camera to a service centre, as would be needed for the F55 hardware upgrade. It’s expected to show up in December 2014, along with Version 5.0 of the F5 firmware.

The upgrade includes 4K SDI and 4K HDMI live Output, and simultaneous recording (of XAVC 4K/QFHD) and MPEG2 50Mbps 422. It also supports 4K playback, which is something that doesn’t appear to be in the F5 firmware at present, even if you try that recent 'hack' and edit that text file to enable 4K UHD recording.

If you want to go all the way from an F5 to an F55, then that upgrade is also available for $16,999. For that fee, you will get all the advantages of the firmware upgrade, as well as the advantages that only the F55 sensor can bring, such as an end to rolling shutter. Having said that, I’m sure that you could even add the software upgrade for the time being and make the full upgrade to the Sony F55 at a later date, as finances allow.

Also coming to the Sony F5 and F55 in December 2014 is a new CBK-55PD option board to enable recording in Apple ProRes and Avid’s DNxHD codecs directly to the Sony SxS Pro+ memory cards that the camera normally uses. This expands the two cameras to support quite a diversity of codecs, as they already support XAVC, MPEG2 and HDCAM SR, not to mention the additional RAW option that's available if you have the AXS-R5 raw recorder.

The CBK-55PD option board is expected to cost $2250. I expect this will fly off the shelves, in spite of the fact that these cameras are so well supported by codecs already.

Rounding out the announcements, the new version 5.0 firmware update for the Sony F5 and F55 will feature simultaneous recording with HDCAM SR 422 SQ and with MPEG2 50Mbps 422 59.94i and also interval recording. This should be available in December 2014 and is the best price of all, as it is going to be free!

So it looks like there are a lot of new options coming to Sony F5 and F55 users, especially those lucky F5 owners, who have a wealth of new possibilities on their way in December. The Sony F5 is shaping up to be quite the bargain in terms of high quality, professional video at a relatively low price. It was exciting when it first arrived, but since then, it has continued to get more and more powerful, as new features have arrived. Sony F5 owners must be feeling quite happy right now, because the arrival of internal 4K recording means their camera is still going to be a viable production workhorse for a while to come - and they even have the option of upgrading all the way to the full Sony F55 camera at a later date. With the F5 currently selling for around £12,000 including VAT, it’s a lot of camera for the money.