Dell Launches its Fastest Ever Workstations 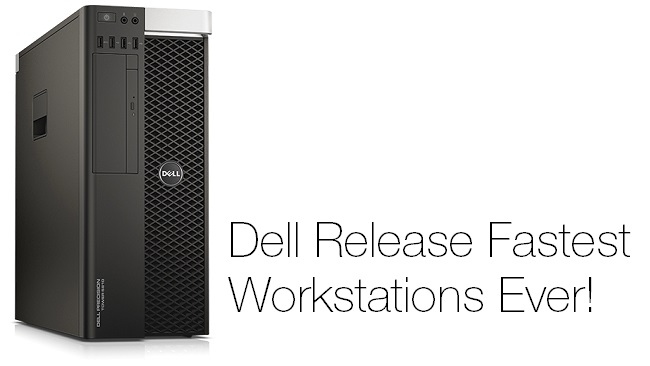 Dell Launch their Fastest Ever Workstations

In my recent article about new PC hardware I predicted the imminent arrival of some monster PCs and Dell has now delivered, with the fastest workstations they've ever sold!

As I wrote in my previous article, PC hardware just stepped up a gear, with the arrival of Intel's latest processors and DDR4 RAM. Dell is one of the first manufacturers to release models based on the new platform and the performance specifications look amazing.

Dell's new Precision 5810, 7810 and 7910 Workstations are some of the fastest machines we've ever seen, with performance up to 4.7 times faster than previous generations.

Configurable with multiple processors with up to 14 cores per processor, up to 512GB of DDR4 RAM, multiple high powered GPU cards such as the Nvidia K6000 or AMD FirePro W7100 and up to 8 hard drives in RAID configuration, these are real monsters.

One unusual option is the addition of a Thunderbolt 2 card, which is the first time we have seen this on a PC, opening up the ability to use some of the latest hardware connected externally.

With prices starting from just over £1000 they are not too expensive (although a maxed out system is over £15,000) you should be able to specify your perfect system for something in between.

I look forward to putting one through its paces soon, in the meantime here is Dell's press release

Design Faster than Ever with Dell’s Highest-Performing Workstations

Whether you’re rendering visual effects for a Hollywood film, designing in AutoCAD for an engineering firm, or generating complicated financial models, workloads are ever-increasing in size and complexity, and require more computing resources than ever to get the job done.

Designed to address these mission and time-critical needs of customers in compute-intensive fields, Dell’s new tower and rack workstations based on thenew Intel Xeon E5-2600 v3 and E5-1600 v3 processors are now available today. With 2133MHz DDR4 memory, they perform up to 4.7 times faster than the previous generation – making it possible to design and iterate faster than ever.

This launch is unique because all the core system components have been refreshed at the same time, which is very unusual across the industry – in addition to Intel’s latest processors, the new workstations feature the latest AMD FirePro and NVIDIA Quadro professional-grade graphics technology, deliver faster speeds  and increased memory capacity, and enable our workstation customers to take advantage of greater performance and scalability by upgrading all their key components at once.

Adding to our most comprehensive portfolio of workstation solutions, the updated tower workstations include the compact single socket Dell Precision Tower 5810 and dual processor Dell Precision Tower 7810 and the highly expandable dual processor Dell Precision Tower 7910, all of which feature Dell’s industry-leading chassis design for outstanding usability and quick internal access for updates and maintenance. Also new with these systems is the option of Thunderbolt 2 technology, which allows for faster transport speeds and simultaneous 4K video file transfer, and quieter acoustics versus the previous generation with the Tower 7910 running up to 49 percent quieter under heavy processor workloads. Also available today, the new Dell Precision Rack 7910 offers all the capabilities of the Tower 7910 in a 2U rack form factor including forthcoming qualifications of Citrix XenServer and VMware ESX hypervisors to support virtualized workstation environments with true workstation class graphics.

The new tower workstations will also release with a new version of the Dell Precision Optimizer announced earlier this month, which automatically configures workstation settings to maximise application performance and delivers gains of up to 121 percent, and will also be available with new Teradici PCoIP Workstation Access Software to enable remote access for workstation users regardless of location.