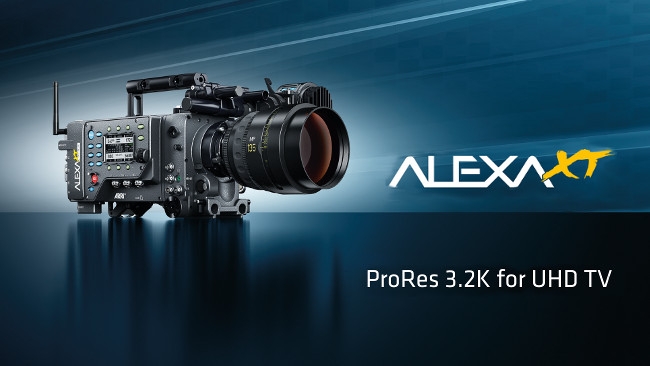 ARRI have made a very interesting announcement. Early next year (2015) they will be releasing a firmware update to allow the Alexa XT to record in 3.2K directly to Apple ProRes format. When it was announced that the Amira would record to ProRes at UHD resolution a few days ago I was left wondering what ARRI had in mind for the Alexa. It seemed strange that they would release such an update for the Amira and not for the Alexa also. This made me wonder if they had something up their sleeve for the Alexa too. Well now we know what they had in mind!

It appears that the Alexa XT update will differ from the Amira update by recording directly to 3.2K ProRes whereas the Amira upsamples the 3.2K to the 3.8K of UHD in camera. I assume this difference in workflow is because the Amira is more geared up for the output to be largely ready to go right out of the camera. On the Alexa XT you lose that advantage but gain the advantage of having smaller ProRes files to work with and archive and also the possibility of using your favourite upsampling algorithm and the choice of whether to upsample to UHD TV or all the way to cinema resolution 4K.

Until now if you wanted to record at resolutions higher than 2K on the Alexa XT you had to commit to recording in ARRIRaw with the workflow that required but now the Alexa XT will be even able to record in 3.2K direct to ProRes.

Another perhaps unplanned advantage of the Alexa XT recording in 3.2K, is that it is quite clear that this is actual native resolution that is available from the camera and that it isn’t just being upsampled from 2K (which a lot of people assumed would be the case with the Amira UHD update).

ARRI point out that this will future proof any content you shoot for the future so that you can shoot now but re-release your movie or other production in the future on a UHD-TV format of some kind. They are also keen to mention in their press release that the Alexa is also well suited to produce content that will work with future Dolby high dynamic range formats and they are working closely with Dolby to make sure the Alexa will be a good match for this technology as well.

As people often point out, we are still a way away from these future technologies being anything like widespread, so for now it’s about recording content that can continue to be easily re-purposed in the future. This new update for the Alexa should make that easier and more economical.

Check out the full press release after the break:

update scheduled for release early next year. ProRes 3.2K allows the same easy up-
sampling in post to UHD deliverables as ARRIRAW Open Gate does to 4K. These

suitable for any type of production with any distribution requirements.

The majority of digital film and television productions continue to capture, postproduce

and distribute in HD or 2K, formats for which ALEXA provides an unmatched solution.

Widespread adoption of UHD/4K post workflows, as well as availability of UHD displays

away – even in the most progressive markets. However, some film and program makers

are already concerned about protecting their work for future developments. The ongoing

debate regarding high dynamic range (HDR) displays, which have an even greater effect

on viewing experience than higher spatial resolution, only adds to these concerns.

to be adaptable and future-proof, ALEXA can easily accommodate productions that

choose to follow a UHD or 4K workflow. The camera's stellar overall image quality in

to UHD or 4K in a quality at least as good as other contenders. And because of their

for asset longevity, no matter what future standards come to fruition.”

For TV productions looking for a UHD deliverable, ALEXA XT cameras and ALEXA

provides the benefits of the well-established and efficient ProRes workflow. As an

additional benefit, most lenses fully cover the 3.2K image circle that results from the 16:9

tools delivers UHD images of the highest quality for broadband and broadcast.

Many high-profile movies have been shot in ARRIRAW 2.8K and up-sampled to a 4K

DCP with spectacular results, an example being the last James Bond film, Skyfall. To

XT sensor area for an optimal up-sample in post to a 4K DCP.

in use on numerous productions already, including Warcraft, San Andreas, Pixels,

Goosebumps and Sicario, the latest movie lensed by Roger Deakins, ASC, BSC. Other

selectively for VFX shots, including Terminator: Genesis, Fantastic 4, Agent 47 and

Capture with ALEXA, Protect for HDR

and when they will be introduced. ARRI has been working with Dolby at major trade

shows to help showcase Dolby® VisionTM display technology, which is capable of 100

times more brightness than a conventional TV. This has contributed to a spreading

spatial resolution in creating a superior visual experience. Recognizing this, other

companies such as Thomson, Philips and the BBC are working on their own HDR

in images beyond the capabilities of current display technologies. The Dolby Vision

presentations have revealed how much better ALEXA images look when displayed

with extended dynamic range, proving the enormous and as-yet untapped potential of

ALEXA-originated material to be remastered for future HDR display standards.

With headquarters located in Munich, Germany, Arnold and Richter Cine Technik (A&R) was founded in 1917 and is the

The ARRI Group comprises a global network of subsidiaries and partners that covers every facet of the film industry,

including worldwide camera, grip and lighting equipment rental through ARRI Rental; turnkey lighting solutions through the

technologies. The Academy of Motion Picture Arts and Sciences has recognized ARRI’s engineers and their technical

contributions with 18 Scientific and Engineering Awards.