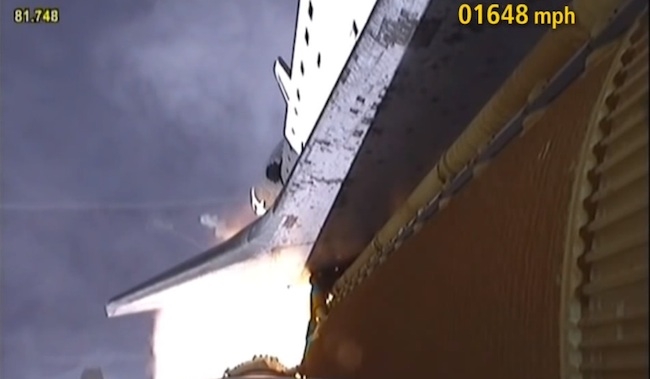 As you know, we do like a good space video here at Red Shark and this one, taking us on an 8-minute journey mounted on a Space Shuttle Solid Rocket Booster first into space and then back down to splashdown at sea, is up there with the best of them due to its amazingly authentic audio.

The video was posted by Michael Interbartolo, who spent a decade working on the Space Shuttle Program in Mission Control in Houston, and is taken from the upcoming DVD/Blu-ray ‘Special Edition Ascent: Commemorating Space Shuttle’ by NASA/Glenn. It’s taken by cameras mounted on the Solid Rocket Booster with sound mixing and enhancement done by Skywalker Sound. “The sound is all from the camera microphones and not fake or replaced with foley artist sound. The Skywalker sound folks just helped bring it out and make it more audible,” says Interbartolo.

It’s all fairly mesmerising, especially in HD. First you get the roar and thunder of the ascent, along with some rather cool glimpses back along the path of the launch plume, then you get the eerie silence of the long descent into the atmosphere after the SRBs have been jettisoned, only punctuated by the internal creaks and groans of the engine’s structure. Then you get the atmosphere and the shock of re-entry before splashdown and a final watery susurration.

The last Shuttle flight was over three years ago

The last Shuttle flight was over three years ago now, and while Space-X is happy to film all manner of its own tests — though, somewhat inevitably, no video was released of its recent test flight where the rocket self-destructed after reporting an anomaly — there’s something about the majesty of the Shuttle and the human endeavour it represented, not to mention the human cost, that still moves.

“Rockets are tricky,” deadpanned Space-X founder, Elon Musk, on Twitter following the self-destruct of his own vehicle. Sometimes it’s worth reminding ourselves that they also look — and sound — magnificent too.

Riding the Booster with enhanced sound