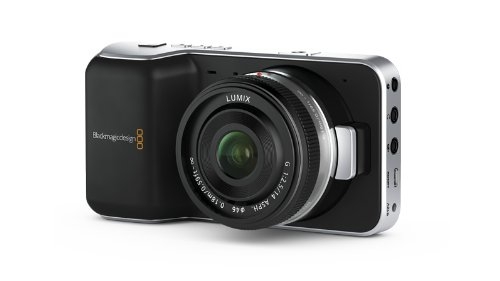 The big ones: Audio Level meters and Time Remaining.

Time Remaining was perhaps the most frustrating omission. Not knowing how much space was left in your storage device meant that you had to rely on guesswork, or be really good at calculating storage times based on bandwidth for a given codec.

Audio Level Meters will be an enormous help to anyone recording sound in sync with video on the camera, and Histogram will be a boon for gauging exposure and lighting.

Here are the details from Blackmagic's support page:

This software package allows you to update your Blackmagic Camera to the latest software release for new features, bug fixes and other enhancements.

Add histogram, time remaining and audio level indicators. Use Up and Down to reveal and hide the meters while Left and Right will adjust the aperture of your active MFT lens.    Fixed bug where in-camera playback may sometimes drop frames.

Before installing the software, we recommend that you run "Uninstall Camera Utility" first.

After loading the software on the Blackmagic Cinema Camera EF or MFT, you may notice a slight flickering on the built-in LCD screen. This is normal and expected behaviour. The flickering will go away after a few minutes of operation.The Blackmagic Camera Installer package installs: