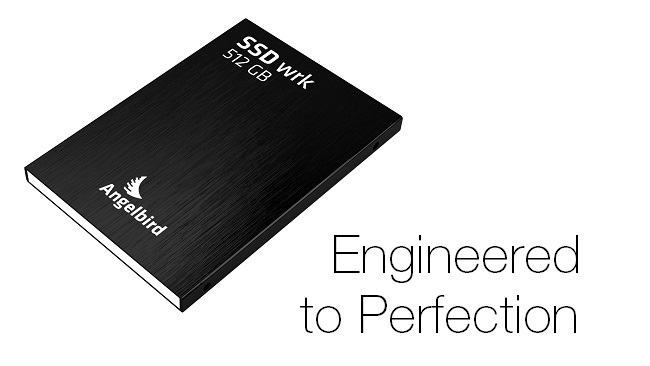 Last year we told you about the Austrian SSD manufacturer Angelbird and their range of SSD drives for the professional market. This year they have a new range of drives and their price/performance ratio looks excellent

In my article last year I wrote about the SSD drive manufacturer Angelbird. Based in Lustenau in Austria, they take pride in the fact that all of their SSD drives are designed, fabricated and assembled in house. Take a look at this video of their manufacturing process.

Angelbird have just released a new range of SSD drives called "wrk" and they are certainly designed to work hard. Housed in a case milled from a single piece of aluminium alloy the SSD wrk uses Micron memory chips and a Silicon Motion controller to provide sustained write speeds of up to 450MB/s and sustained read speeds of 563MB/s.

They use the SATA 3.1 6Gb/s interface and have Overload and Static discharge protection as standard. They are rated at more than 2,000,000 hours MTBF (Mean Time Between Failures) and Angelbird back that up with a three year warranty.

They are also designed to have a very low power consumption which makes then ideal for mobile devices like laptops and cameras. With a standby power drain of just 0.25W and a maximum load of 1.97W for the 128GB version they won't run your batteries into the ground.

The Angelbird SSD wrk drives are available in 128GB, 256GB and 512GB capacities with expected retail prices of $99, $159 and $299 respectively (plus local taxes) That makes for a very reasonable price performance ratio and it's no surprise that they are already picking up awards and recommendations from technology websites and magazines.

I can't wait to get my hands on one and will give you a full review when I do. In the meantime, you can read Angelbird's press release over the page.

Angelbird does not compromise in terms of quality in its new SSD wrk, using an ultra-fast SATA 3.1 6Gb/s interface, which is fully compatible with older computer set-ups and operating systems. The SSD wrk uses the SMI 2246EN controller and the case is made of high quality, matt black anodized aluminum, housing custom packed Multi-Level-Cell NANDs from Micron. Durability is guaranteed by the MTBF of at least 2 million hours. High reliability is also provided by the integrated EDC and ECC error correction capabilities. With a thickness of only 7 Millimeter, the SSD wrk fits even into the tightest notebook or desktop case.

The SSD wrk is equipped with additional overvoltage and ESD protection features. Overload Protection, TRIM and EMS protection are standard in all SSD-wrk models. The read speed is up to 563MB/s, sustained writing speed up to 450MB/s. The SSD wrk delivers 72,000 IOPS (Input/Output operations per second) and the access time is less than 0.1 milliseconds. Customer security is provided by the three-year warranty.

Angelbird offers its customers the opportunity to register for the Customer Portal PSP via the serial number of their device. The PSP provides information such as the remaining warranty period. In addition, the PSP offers free downloads of full versions of current programs. The software is constantly expanding with new titles and technical assistance will also be offered in the near future via the PSP. Warranty or repair cases can be handled entirely on the portal.