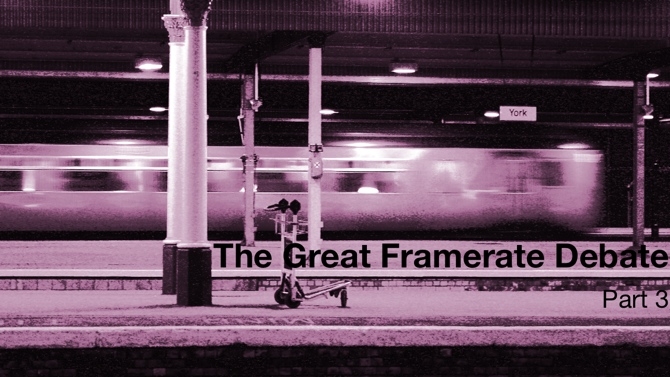 If you've read the previous two parts of this analysis of frame rates, you'll be aware that what we're all doing is chasing a standard that wasn't picked for how it looked, on the basis of how that standard compares with something else that also wasn't picked for how it looks. Regardless of how much sense this makes, it does lead to a few regional variances in the way this stuff works, principally involving the interaction of 24fps film with local television standards.

Part 1 of this three-part series is here.

If you'd like to contribute to the debate about framerates, please email editor@redsharknews.com. We'll publish the best comments.

The simplest of these situations is when 24fps material is shown in PAL regions, where it's simply sped up by four per cent and shown at 25ps, with both PAL video fields being derived from the same film frame. When CRT monitors were common, it was in fact entirely normal for actual 24p signals to be viewed as 48 interlaced fields per second. Needless to say, the one frame-per-second difference is invisible to human observers, although the accompanying four per cent upward shift in audio pitch was often irritating to PAL viewers blessed with perfect pitch (these days, it's often corrected digitally). Picture wise, though, the result was and still is that PAL regions get more or less the same motion rendeirng experience at home as they do in the cinema.
The situation in NTSC regions is a little more complicated, because simply speeding 24p material up to 30 would produce an obvious and unacceptable change in timing. In any case, 30p material when shot and displayed at that frame rate already looks significantly different to 24p; the higher rate produces visibly different, smoother motion rendering. The technical trick that's used to resolve the problem is called 3:2 pulldown and, briefly, involves repeating film frames across either two or three sequential fields of interlaced video. It produces very specific and clear timing artefacts in the resulting video, which, in NTSC territories, have become almost as strongly associated with narrative filmmaking as the 24fps progressive characteristic itself. The first 24p cameras, such as Panasonic's DVX-100, recorded 3:2 pulldown directly to tape, although standard-definition 24p cameras commonly also provide easier-to-edit options that avoid splitting individual film frames across the fields of several video frames.

In either case, attentive readers will have realised that this is yet another engineering decision which was not made based on an objective assessment of what our pictures look like, but based on what would work least badly.

With the advent of HD and digital broadcasting, there's a lot more flexibility in frame rate both during acquisition and exhibition. Sporting events are commonly shot live and broadcast at 60p, which simultaneously provides high temporal resolution to allow viewers to more clearly follow a ball or fast-moving player. Movies can be broadcast as 24p. Even more so, an increasing amount of material is produced for, and solely viewed on, the internet.

You might think that this would solve all our problems given the fact that the internet doesn't care about frame rate. In fact, the video displays of desktop computers generally operate at a fixed frequency, often 60 frames per second, with video frames of any other rate being displayed on an ad-hoc basis such that over time the average rate is correct. This might result in a single frame of a 24p production from, for instance, a blu-ray disc, being displayed for either two or three computer display frames, which can create a visible chatter or instability in motion. Many online services, including Vimeo and Youtube, did not at the time of writing support more than 30fps for video in any case.

In short, the way narrative fiction is expected to look is actually based on nothing more than a series of technical decisions, workarounds, and compromises, which combine to habituate us to 24fps pictures. There's no really good technical reason for it but given the somewhat negative reaction to higher frame rate productions recently, it's likely to be something we're using for a while, regardless of of how many alternative options come our way as a result of the march of technology.

If you'd like to contribute to the debate about framerates, please email editor@redsharknews.com. We'll publish the best comments.