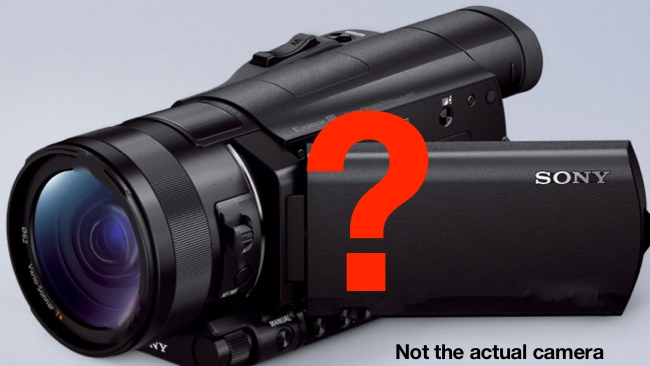 Sony's being pretty light-lipped about the exact details of this new camera, which has been revealed only as a "technology demonstration" so far...

In what can only be described as a torrent (well, three of them) of new cameras in the last couple of months, Sony has - at least partly - announced a new XDCAM using a "1.0 Type Exmor R CMOS Sensor"

At 20 megapixels, this looks pretty much like it could be the sensor in the AX100 4K camcorder and the QX100 lens-style camera. The AX100 is a 4K camera and the new XDCAM is not but if it follows the latest trend from Sony, its HD images will effectively be downsampled from what is a 20Mpixel 5K image.

Footage will be recorded in XAVC Long GOP with 422 10-bit sampling.

Information is sketchy at the moment but Sony has said that "the new camcorder is set to become Sony's most compact XAVC-capable XDCAM to date."

We called Sony and they were pretty tight lipped, not saying anything beyond what's in the press release below. What they did say is that this is definitely a 1" sensor.

So, this opens up some very interesting possibilities. The first is that the press release did not rule out that this new camera might at some point become capable of 4K recording. The press release said:

which is about as vague as it could get. It doesn't, for example, say that the HD in question is 1080p, which is vague enough for us to think that 4K could be achievable.

We think it's reasonable to expect that, given that the AX100 is 4K. It's also reasonable to think that it won't be 4K either, because neither of the recently announced PXW-180 and PXW-160 are 4K cameras, but they have a different sensor arrangement.

Whichever of the above turns out to be true, I think we can anticipate a fairly significant product when the full details are released: a very small camera that's got a relatively large single sensor, that's likely to be capable of capturing very detailed pictures.

Another phrase that we're intrigued by is:

"The camcorder will be designed to support broadcasters and AV professionals as they modernise their workflows with a focus on increased data transfer speeds. "

Many more details will follow but meanwhile, here's what Sony has to say in their rather brief press release.

Basingstoke, June 17, 2014: Sony has announced that a new addition to its XDCAM Series of handheld solid-state memory Camcorders is in development, and is set to be made available this year.  The new model has today been publically previewed for the first time, with delegates able to see the camera at Broadcast Asia, taking place in Marina Bay Sands, Singapore.

The new XDCAM camcorder features a 20M pixel 1.0-type Exmor® R CMOS Sensor and the capability to record in XAVC Long GOP, enabling 422 10-bit sampling for high-definition recording with rich tonal expression. The camcorder will be designed to support broadcasters and AV professionals as they modernise their workflows with a focus on increased data transfer speeds.

Upon its release the new camcorder is set to become Sony’s most compact XAVC-capable XDCAM camera to date, well suited to field operations for a broad range of professional applications.

“Following the recent announcements of the PXW-X180 and the PXW-X160 camcorders, we’re excited to see the momentum which exists across the industry in adopting the XAVC recording format,” said Robbie Fleming, Product Marketing Manager, at Sony Professional Solutions Europe. “This new compact addition to the XDCAM line-up will bring the benefits of XAVC to an even broader audience, whether it’s in education, videography or news and broadcast production.”