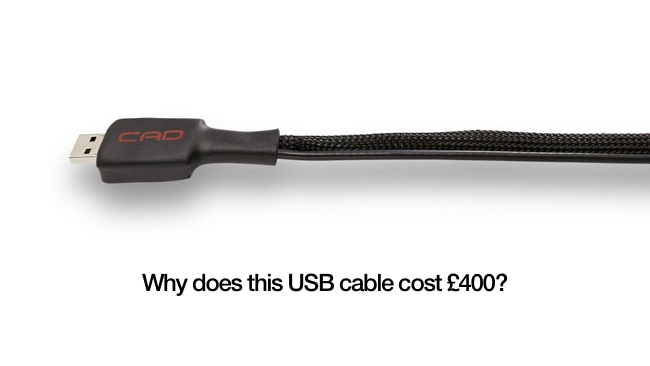 Update: We've heard from Scott Berry, the designer of the cable, who's written a reply to this piece. You can see what he says at the end of the article.

How can a USB cable cost £400? Well, it probably doesn’t cost anything like that to make but you can charge whatever you like for a product and if you can sell them at that price - you’ve got a pretty good business.

There is some method to this madness, but it’s just not explianed very well either by the compnay that makes the cable, or by the journalists who have reviewed it.

Digital cables are not digital

There is more than meets the eye to digital cables.

The first thing to understand is that digital cables are not digital. Not even slightly. In fact, they’re 100% analogue. You simply can’t send numbers down a cable: a number is a concept, and cables don’t carry concepts. What they do carry is voltages and current, and the job of a “digital” cable is to carry signals effectively so that the numbers (and the timing of the numbers) that the voltages and currents represent can be accurately extracted at the other end.

And that’s where the problem is: quite often, the pulses that represent the numbers get mangled.

There is an intrinsic problem with cables carrying digital signals. The easiest way to represent ones and zeros is with a square wave or pulse. It makes sense: in a binary system you only have two possible signal levels. There really should be nothing in between “on” and “off”. So, ideally, all the receiving circuit should have to do is tell the difference between on and off, high or low, etc.

But remember - digital cables are actually analogue cables, and in the analogue world, things are far from perfect. Cables have resistance, inductance and capacitance, all of which can degrade a signal whether it’s carrying digital information or not. The longer the cable, the worse it gets.

The problem is timing

None of this matters much initially, because even if the square wave ends up looking more like a sine wave, it still has a top and a bottom, and as long as it’s possible to detect these, it’s easy enough to extract the meaning from it. The real problem comes with timing.

Digital video and audio signals, as opposed to timeless data (like a spreadsheet or like this document as it is being typed) needs to arrive in time, in a constant fashion. If it doesn’t, it’s likely that the signal, when it’s reconstructed at the other end, will be distorted. It’s easiest to see how this might happen with audio.

Think of a nice, even, crisp square wave. And now imagine what it’s going to look like at the far end of a poor quality cable. It will, effectively, be a wonky sine wave, or a combination of several of them. Sine waves get narrower towards the top, unlike square waves, whose sides are vertical.

This shouldn’t be a problem, and it won’t be, as long as the recieving circuit measures exactly at the point where the waveform crosses zero. If it doesn’t, in other words, if it measures the waveform above or below the zero line, then it’s effectively going to be measuring the upside and the downside of the waveform at a point where it’s not symetrical. Which means that the resulting output, instead of being a regularly spaced pattern of ones and zeros, is going to be more like two pulses and then a gap, then two more pulses and another gap. 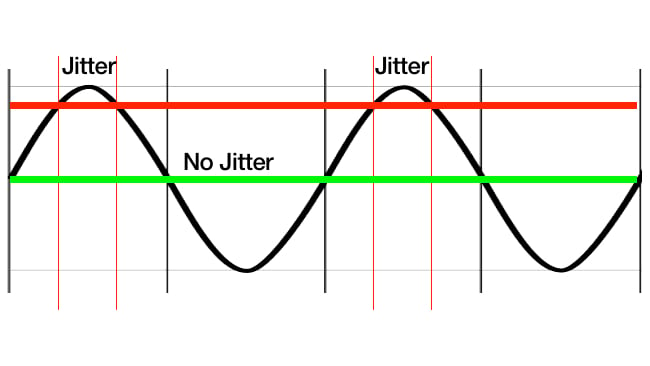 This is one example of a phenomenon called Jitter, and it’s one of the worst things that can happen to your digital signal. If a jittery digital signal is feeding an audio digital to analogue converter, the result will be distortion ranging from subtle to severe. If it’s not severe, you can still hear it, although you might not be able to put your finger on it: I find that jitter-affected audio just doesn’t sound quite right.

If the jitter is bad enough, it can cause data errors and severe distortion to either audio or an image. Built-in forward error correction can compensate for this but there are limits to how effective this can be.

A sensible way to correct Jitter is to “re-clock” the signals at the receiving end. Usually done with a device called a Phase Locked Loop, the incoming signals provide a rough timing indication to the PLL, which then corrects the timing, a bit like a flywheel smooths out jitter in an engine.

But this can only work if the signals are strong enough and not completely mangled.

Cable lengths go down as data rates go up

As the data rates of digital signals increase, cable quality becomes more and more crucial, and the most important quality of all is its length. Generally, the higher the bitrate of the signal, the shorter the cable will have to be. I’ve come across people trying to record video on an HDMI recorder who’ve experienced weird problems, all of which were explained by the fact that they were using a twenty metre HDMI cable!

SDI works over a relatively long distance, but as you get into the more recent varients like 3G, 6G and especially 12G, you’ll find that maximum cable lengths are severely diminished. You’ll find that HDMI cables carrying 4K signals will have to either be quite short, very high quality, or both.

Why is this cable so expensive?

So what about that USB cable? Why is it so expensive?

Well you can have a look at the website, but it won’t explain very much, so I’m reading between the lines here. The cable is for a very specific use: to connect a computer to a very high quality digital to analogue converter.

Obviously all the above about jitter applies here, although we’re talking about audio through a USB cable and not straightforward SP-DIF.

The special digital to analogue converter is the DAC equivalent of a forumula 1 racing car. Everything that isn’t needed is stripped out and performance is the priority over everything - including cost, I would imagine.

With HiFi, there’s a lot of mythology and a lot of science, and it’s hard to separate the two, sometimes. It’s very hard to know whether the money you’re spending on improving quality though expensive equipment is actually better spent on something much simpler. Here’s a good example: if you want to make your loudspeakers sound twice as good, buy a solid, heavy stand, with metal points that cut through the carpet to the floor underneath. And the. buy some high-current cable (doesn’t have to be esoteric “audio” cable - 45 amp cooker cable will be just as good, although it won’t be very flexible). I guarantee this will make your loudspeakers sound as good as speakers twice the price or more.

I can see some sense in this, but possibly not £400 worth.

Computers are electrically very noisy. All those “digital” signals are spiky and unpleasant if they find their way into an analogue audio circuit. Switched Mode power supplies are especially nasty. When you listen to computer audio through headphones sometimes it’s not too bad but more often than not silences are filled with what sounds like someone tuning a shortwave radio. All of this stuff can be passed electrically down a cable into an amplifier or the mission-critical parts of a digital to analogue converter. They’re bad enough that they can completely overwhelm the additional quality and headroom gained by using a good DAC.

So, if this cable can solve this problem in a significant way, it just might be worth the money. Put it this way: if you’ve just spend ten grand on some kit (DAC, Pre Amp, Amp and speakers) to play the music on your computer, it would be a shame to have it ruined by power supply noise coming across a cheap USB cable.

But £400? Really? I’m open to persuasion on this but I don’t think I’m quite there yet

Update: We've heard from Scott Berry, the designer of the cable, who's written a reply to this article. Here's what he said:

Hello,
My name is Scott Berry, I am the engineer responsible for the design of the Computer Audio Design 1543 DAC and also the new CAD Cable.
First, I would like to thank David Shapton for his excellent article and for one of the better explanations about why USB cables could sound different.
I understand that for many it does not make any sense that a USB cable can make a difference. That is the main reason why we decided to offer a 30 day guarantee, we have made it a no risk option.
I started working on the cable right after I finished the 1543 DAC, about 3 years ago. When I started all this I too did not think that a USB Cable could make much of a difference. But I live, eat and work computer audio - it is all I do, and I was hearing a difference between cables.
We are a small company and I agree, we are vague about what makes the CAD Cable different. This is because our cable is using technologies that others are not. We would like to keep it that way as long as possible. I will say that if you look at the pictures of the cable it should be reasonably obvious that there is something else going on within the cable?
All I ask is for you to try this for yourself. Go to any of our dealers and connect up a standard USB cable and compare that to the CAD Cable. No tricks, you can bring a USB cable if you wish. I do this quite regularly, it will not take up much of your time.
Best Regards,
Scott Berry
www.computeraudiodesign.com