Virtual studios come into their own during elections 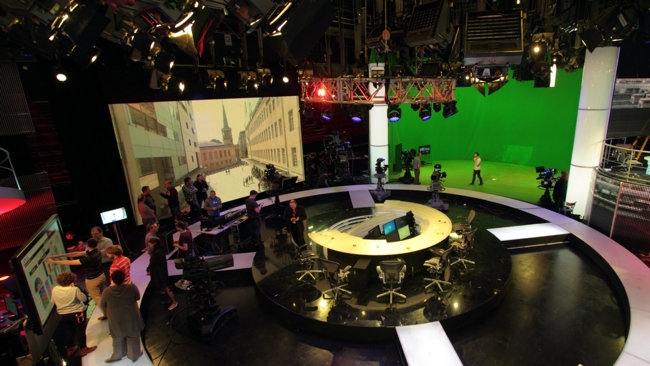 There's nothing like an election to stir virtual studio technologists into action!

This meant that the game was never the same again, because, not only could they be updated in real time, but they provided a canvas for the more creative programmers and designers to use every opportunity to explain the usually quite complex dynamics of the election to the audience. It's one of the ironies of democracy that few of us actually understand how the voting works.

Perhaps the biggest innovation, which had nothing to do with computers, was the Swingometer. This peculiarly English device has become a tradition as it's progressed through many generations. Initially an exclusively analogue device, it probably helped more people to understand the mechanics of an election than anything else. What it did was show how many seats were likely to be won or lost for each of the two major parties for a given "swing" in the vote. It also showed how close either party was at any time to having an absolute majority (the point at which, assuming all their members were loyal to the party, they didn't have to worry too much about losing a vote to the opposition). In most parliamentary democracies, if you don't have this majority, you'll have to form a coalition government, which is the state that the UK is in at the moment.

The swingometer was very amenable to computerisation. The computerised versions worked in exactly the same way, but could be programmed with the exact figures and became a wonderful visualisation of the state of play at an particular time. 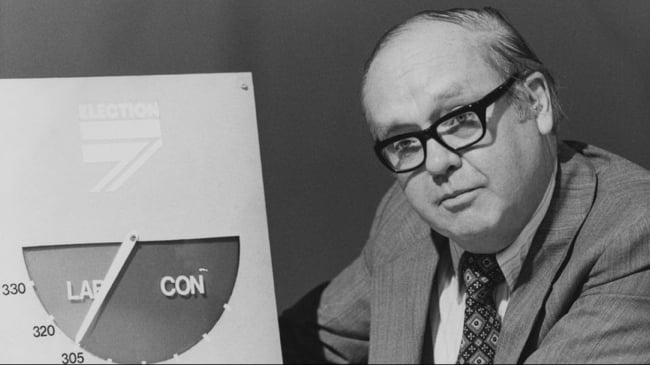 Many elections have more complex components than UK ones, and even the scene in the UK is changing with the emergence of more radical alternatives to the mainstream parties. The humble swingometer woudn't be able to cope with this complexity but computer graphics can do it with ease.

Election-night computer visualisations rapidly moved from 2D to 3D, with increasingly sophisticated rendering. Perhaps the biggest leap to follow this was the move to virtual studios.

A virtual studio looks to the audience like an extremely sophisticated set, where the election graphics can become not only solid 3D objects, but real-looking things that the presenter can walk around and in front of. Cameras don't have to be static to make this work because they have clever tracking systems that tell the computers generating the graphics how to render them correctly for the camera's current viewpoint. As real-time processing has grown, so have the capabilities of the graphics, to the point where, one suspects, the producers have had to restrain themselves to avoid the whole thing looking like a tacky computer game.

All of this is part of the process growing maturity and sophistication. One day, all programs will be made like this.

Here's a press release about preparations for the BBC's coverage of today's Local and European elections, which, for the benefit of readers outside the UK, are going to be a bit more interesting than usual because the anti-Europe party, UKIP, is, according to the polls, expected to beat all the traditional parties to the post. At the same time, there's a minor surge towards the Green Party. All of which could make for an entertaining nights viewing, and a challenging one for the graphics artists and programmers!

22 May 2014:  BBC Studios and Post Production is supporting BBC News’ local and European elections broadcasts from New Broadcasting House by delivering a series of live programmes from Elstree. BBC Studios and Post Production’s Elstree Studio D has been transformed with a brand-new virtual reality tracking system to enable Jeremy Vine to engage BBC viewers with his inimitable analysis of the full election experience.

Fronted by veteran Question Time presenter, David Dimbleby, and accompanied by a host of guest interviewees and commentators - including Jeremy Vine, Emily Maitlis and Nick Robinson - the 23 hours’ worth of live programming will air across BBC channels from 22 to 26 May.

BBC Studios and Post Production put a new infrastructure in place at BBC Elstree Studio D last year, including equipment redeployed from Television Centre, to meet the demands of large live event shows like BBC Children in Need 2013 – the biggest and most ambitious appeal show to date. The news elements of the elections programmes will be broadcast from New Broadcasting House harnessing the building’s core potential, while using BBC Studios and Post Production’s Elstree Studio D to scale up the broadcast capacity.

The Elstree Studio D facilities include a new virtual reality environment with a green screen set for Jeremy Vine. To enable Vine to be completely and virtually immersed with graphics and up-to-the-minute statistics, BBC Studios and Post Production is utilising brand-new virtual reality technology. Attached to the studio cameras, MoSys Star Tracker uses an upward looking camera that tracks random markers on the studio’s grid and sends positional information to a computer to render the correct viewpoint. This means that Vine can move around the green screen environment, without affecting the position of the virtual graphs and charts, to create a seamless and completely immersive viewing experience.

“We are delighted to be working with BBC News on this project. Providing studios, technical facilities and staff expertise for such a large scale and complex live event as the elections is the perfect showcase for BBC Studios and Post Production’s capabilities,” said Anna Mallett, CEO of BBC Studios and Post Production. “We’ve always been quick to embrace new technology, such as HD and then 3D, so to be using a new piece of virtual reality technology that will enhance viewing experiences is something that we’re all really excited about.”

The studio floor at Elstree will comprise a multi-camera set-up of 12 cameras, five of which are virtual reality capable. The centre of the studio will house David Dimbleby alongside the BBC’s political editor Nick Robinson and guests from the main political parties. Facing a wall of LED screens enables Dimbleby to interview politicians in their regions via a live video feed. Adding to the big screen, immersive experience, Emily Maitlis will be in front of a 103” interactive touch screen to provide the latest developments from each area of the country.