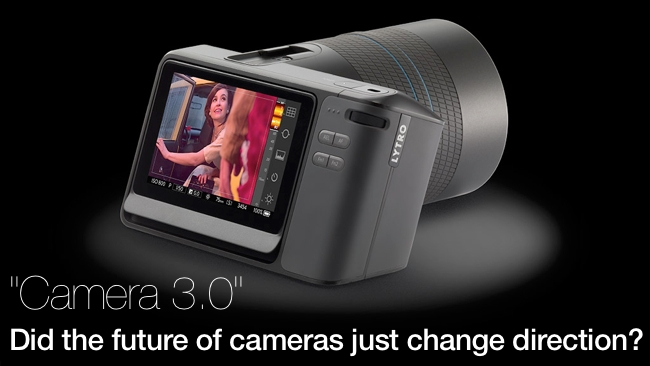 Lytro's new Light Field camera is out and it's light years ahead of where we expected to be. Great industrial design, and a very much more powerful lens/sensor combination. You might be able to do serious work with this. And it might just have legitimised a completely new type of photography

Imagine how you'd feel if you were transported to an alien planet, where everything was different. Maybe a few things would be familiar, like a sun and stars in the sky, and some bird-like things flying in the orange atmosphere (but admittedly you could be in Beijing).

There might be some liquid flowing in what look like waterfalls but which could equally well be methane or formaldehyde, and the plants and trees would possibly reach for the sky in a familiar way, even though they're blue.

That's how I felt when I heard about the new Lytro Illum camera. It's a shock to the senses, in more ways than one. I was definitely in unfamiliar territory.

Thanks to Engadget for breaking this story. They have a very good piece on this astonishing new camera.

It really is astonishing

I use the word "astonishing" advisedly. First, I don't think we have still fully got used to the idea that you can focus an image retrospectively. And it's entirely reasonable that we haven't, because with film - and until recently, digital - the image you captured was, well, a snapshot. It's a slice in time. You can't alter it once it's been taken, except, perhaps if you "push" the saturation and contrast. But in doing that you're stretching what's already there to give you a heightened effect at the expense of quality. Altering the focus would need more information than you'd captured, and the light would need to have been harvested in a different way. And then, you'd need to process it, intensively, to make sense of it from different angles and viewpoints.

And that's what the original Lytro camera did. Very effectively.

Except that it was - let's be honest - an odd-looking thing. Not that we'd wish to be judgemental about the appearance of a radical new type of camera; it's just that it didn't look like the most professional of devices and I think that would have restricted its sales, limiting them to experimenters and geeks like me.

The other thing was that the pictures weren't of a very high resolution. There were good reasons for this. Because of the intense calculation needed to retrospectively alter focus - or to even create any image for that matter, it was probably important in this early design to limit the resolution to keep the responsiveness of the camera to acceptable levels.

You might have thought that the first camera would therefore have been a commercial flop. Well, we don't have the figures so perhaps it was. But perhaps it wasn't, because the new Lytro camera is as advanced and seemingly powerful as the old one was odd. It's a very striking - and rather beautiful - design. They must either have sold a lot of Lytros version 1.0 or had some additional funding because the new cameras are spectacular not just in their performance, but in their design too.

Apparently, when you're talking about Light Field cameras (because that's what this is) you don't mention Pixels or Megapixels. You talk about Mega Rays. That's fair enough because although the picture is quantized in proportion to the number of light receptors in the sensor, the image itself doesn't exist until after it's been processed. And even then, it's not a single image, but an almost infinite number of them with different focal characteristics, and even with an element of 3D in them (from a single lens!).

The first Lytro camera only had a resolution of around one megapixel!  (1080 x 1080) That's better than some of the very first digital cameras, but only just. The malliability of the pictures made up for it but it wasn't really good enough for professional media industry use.

The new camera? That rather stunning shape contains a 40 megaray sensor. We'll have to wait until we can find out exactly what that means, because even though the first camera had 1080 x 1080 megapixels, it was described as being 11 Megaray. Confusion reigns due to new technology not yet being assimilated into our roster of easily understood things. Does 40 megarays mean it's four times better than the original? Maybe, but I suspect that it's even better than that, because the processing will have improved as well: don't forget that pixels are just the starting point with this camera.

The lens is new as well. It has an 8x optical zoom wiht a constant f/2.0 aperture. It has fewer optical elements than a conventional lens because the software interprets the raw light rays and can correct for aberrations that would normally require additional glass. So it weights less and does more.

The sloping, urgent-looking design incorporates a 4" touchscreen that shows you the refocusable areas. The GUI and the physical parts of the camera are refreshingly simple; again, most of the complexity is in the software. As far as we can tell, it's a mature and friendly, looking interface.

When you listen to the founders of Lytro talk about their technology, they put it like this: Camera 1.0 was film. Camera 2.0 was digital. And their Light Field cameras are camera 3.0.  This generation of cameras is not just about capturing an image as a pattern of pixels, but about pushing the raw concept as far as it's possible to go. They're not just taking the unprocessed pattern of images off the sensor, but, instead, they collect information about all of the light that's coming into the camera, including its direction as well as its intensity.

In a sense, you can think of a conventional lens system and sensor as a kind of analogue processor. It gives you an image you can see and manipulate in conventional, if limited, ways.

Once we all understand more about what you can do it post production with a light field image, just imagine what sort of software there will be to process it.

Perhaps, ultimately, there will be a video version of Light Field photography. It's not here yet - you can imagine that you'd need much more powerful processing capability than we currently have - but perhaps as an intermediate stage we might be able to capture and store the raw light field images, and process them later into 24, 25, 30, 50 or 60 images per second.

Imagine having that degree of control over a critical depth of field shot.