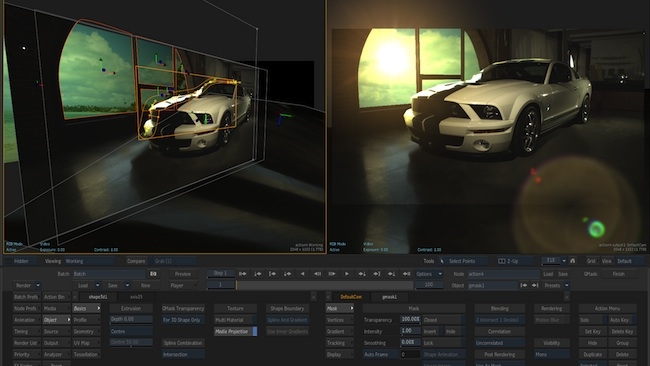 3D mapping on the Flame interface

Flame is one of the last bastions of the old model of post production and is almost single-handedly what the hero suite is all about: expensive, opulent suites hosting client-attended sessions on high-powered kit in fashionable parts of the world's cities where sushi bars outnumber coffee outlets.

Flame still drives much of the advertising industry, and with Flame 2015 raising the bar to include 4K operation, the format has a powerful creative toolset at its disposal which means more creative work can now appear in its native glory.

Flame 2015 also now supports the addition of a second GPU card in the Flame workstation; Background Reactor then helps accelerate workflows by allowing artists to send their shot, sequence, or batch setup to the second GPU for rendering while continuing to work interactively on certain other tasks in the foreground.

As well as a host of new effects tools, Autodesk has also introduced Flame Assist, a Mac-based, timeline-centric assistant station that can be used to take on a number of tasks related to starting and completing Flame Premium projects. This can usually be manned by an assistant, maximising the time spent in the hero suite at suitably heroic rates.

Also new from the company at NAB was Smoke 2015, which added some interesting new features to the erstwhile editing package. These included a new timeline-integrated 3D tracker that allows editors to match original camera movements in a clip in order to realistically add new elements, and a new Timeline FX workflow which boosts effects capabilities available to them at the same time.

Perhaps most significant though was the news that Smoke 2015 will soon be available as a Desktop Subscription, so customers can access the software on a pay-as-you-go basis for the first time. Prices are $195 SRP/month, $545 SRP/quarter and $1,750 SRP/year, allowing the software to be fully deployed as and when on a per project basis.