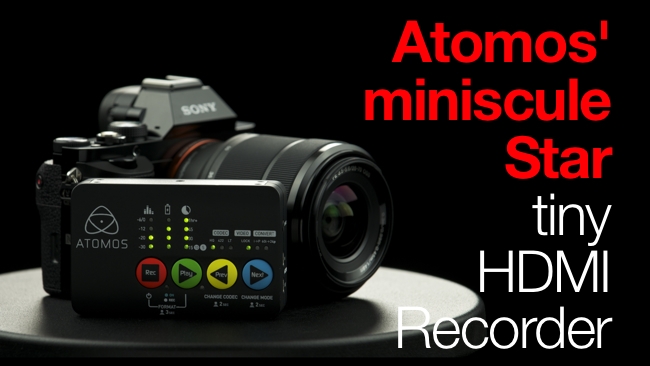 Atomos is one of the best examples of a company that rides the wave of new technology. As soon as a new function or capability becomes possible at a sensible price point, Atomos jumps on it and makes a product.

It did this with the original Atomos Ninja. It wasn't the first ProRes Recorder, but it was the first at an eye-catchingly low price that included a UI with a touchscreen and which could be used to monitor video in real time.

It was well-made as well. According to Atomos, it was made from "aircraft-grade" aluminium (aluminum) and it certainly felt solid.

But while that was exactly what you'd want most of the time, sometimes you wish you could have something lighter - especially if you're into extreme sports or remote-control aviation.

And that's exactly what the Ninja Star is for. Breaking away from the Atomos tradition of using a touchscreen, the Star is screenless, but with good reason: why would you need a screen on a remotely controlled vehicle when there's no-one to watch it? Ditch the screen and it's cheaper and lighter.

Hard drives - and even SSDs - are not weightless, whereas the new CFast cards almost are, and so the Star uses this new, fast storage medium, giving up to three hours continuous recording of 422 10 bit ProRes.

Incredibly, the Ninja Star weighs only 100g - a tiny fraction of the weight of "conventional" ProRes recorders.

According to Jeromy Young, the ebullient CEO and founder of Atomos, "Our customers screamed for a tiny flash based Apple ProRes recorder and player for extreme applications, their second location cameras or simply when they already had a monitor."

In his view, "This is one of our best creations yet".

The Ninja Star will be available in Late May, price to be confirmed but thought to be around US$250.

The HDMI input will work with the most DSLR and Mirrorless cameras with a clean HDMI output, as well as Pro and Consumer camcorders.

The Ninja Star is a must have for people who need to "Record Apple ProRes on Board" camera rigs, such as Drones, RC Helicopters, extreme sports and Reality TV.

"Our customers screamed for a tiny flash based Apple ProRes recorder and player for extreme applications, their second location cameras or simply when they already had a monitor." said Jeromy Young, CEO and Founder of Atomos. "At $295 with low cost Gen 1 CFast, weighing a mere 100gms (3.5oz), it’s price, durability and portability is unmatched – this is one of our best creations yet!”

The Ninja Star is the next break through in external HDMI recorders based on core technologies that have made Atomos the leader in camera mounted solutions. Its small, self contained size and flexible mounting options allow DP’s and cameramen to mount it to just about any POV set-up and offer edit ready format recording with Apple ProRes.

Since the company was founded in 2010 Atomos has broken new ground in the design and functionality of recording, monitoring and playback devices. By listening closely to their customers Atomos recognised a common need for a light and portable Apple ProRes recorder which has greater flexibility with mounting options. The dimensions of the Ninja Star are slender at only 3.5" wide, 2.3" tall and 0.8" deep and it weighs a fraction of a normal recorder at just 100grams (3.5 oz). The Ninja Star is perfect for creative or extreme camera work or in situations where a large monitor is prohibitive or stealth is required.

Taking advantage of low-cost, modern technology by utilising HDMI-capable pro-video and consumer camcorders, as well as DSLRs and mirrorless breeds. The Ninja Star can record in both HD and Apple ProRes to capture pristine, 422 10-bit images straight from any camera sensor directly to inexpensive first generation CFast media with up to 3hrs Apple ProRes for $250. It also features Timecode and Start/Stop Trigger along with Audio Line-in.