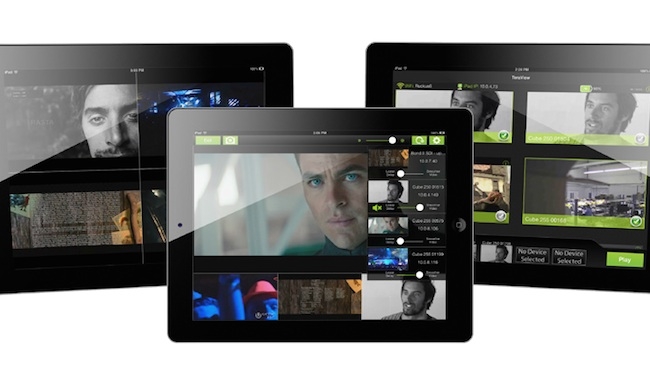 Three new products from Teradek aim to seriously boost wireless video functionality for your camera, from transmitting straight into a DIT Cart to improving collaborative workflow on set.

First off, Teradeck has unveiled three new video transmission systems for its popular line of Bolt products. The Bolt Pro 300, 600, and 2000 now come with both an HDMI and 3G-SDI input on the TX and ship with newly designed fan-less receivers, including one with the patent-pending GRAB engine, which turns the Bolt Pro into what the company claims is the world’s first wireless video capture card.

The short range Bolt Pro 300, middle range Bolt Pro 600, and long range Bolt Pro 2000 all transmit uncompressed 10bit RGB video at less than 1ms of latency. Each system is multicast capable up to four receivers so you can send your feed to multiple destinations at the same time.

Probably the most exciting addition to the line is the new receiver with GRAB engine for Bolt Pro 600 and 2000 models. The device offers both 3G-SDI and USB 3.0 outputs so users can ingest Bolt’s uncompressed 10bit RGB video feed directly into a DIT Cart, NLE computer or live production switcher with no added delay or further conversion required.

Also new from Teradek at the show is the Cube Pro + Timecode Buddy, a camera back H.264 encoder with Timecode Buddy’s system, all of which means one single controller board built-in for highly accurate wirelessly controlled timecode and genlock over the 900MHz band.

And Teradek Serv is a groundbreaking camera-back and tabletop HD-SDI transmitter that allows your clients and production staff to view every shot in real-time on their smartphones and tablets. Serv supports up to 10 connections at a single time and transmits both HD and SD video & audio in perfect sync over dual band WiFi. Since Serv utilizes WiFi networks, the range can be easily extended by adding any standard dual band router to your setup.

Latency isn’t an issue as Serv transmits at just 4 frames of delay and is compatible with Teradek’s free TeraView application, which lets you view and record up to four live feeds simultaneously on your iPad or Samsung Galaxy Pro Tablet at the same low latency. Useful…