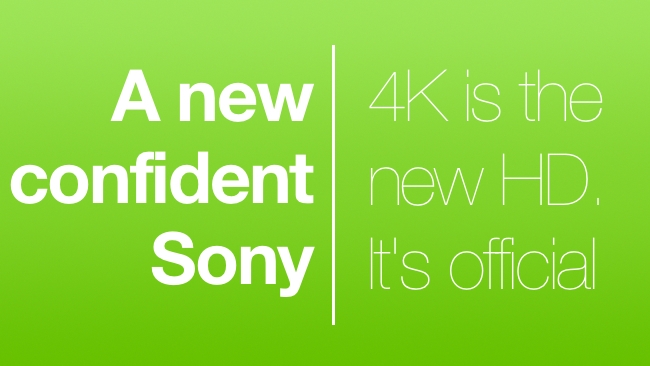 Sony seemed to have found a new confidence in its presentation today. It feels like the days of pushing new (or old, in the case of 3D) technology just for the sake of making people buy new stuff — and largely failing to do so — have passed.

Even though plenty of people have said that 4K is exactly that (that this is new tech for the sake of new sales), the response of the market has shown otherwise. Nobody has to buy 4K, and yet this new high resolution format has brought Sony's languishing TV sales back into profit, and the production community is falling over itself to future-proof its future media with 4K.

It felt like we were watching a paradigm shift today. There were new products announced (we'll come to them in a minute) but more than anything, today was about consolidation. It was saying that the future is here, we're living in it, and now our job is to make it work better.

For example: Sony's flagship range of video cameras, the F5 and F55 have been around for a year and a half now, but they don't feel old. In fact, they seem fresher than ever. There's a reason for that. Hardware is not just hardware any more. The insides of these complex products have gone soft. Made largely from reprogrammable electronics using FPGAs and similar technology, they're radically changeable and upgradable. And with this generation of cameras, even when you can't upgrade the software, you can improve the hardware as well.

There were audible gasps from the audience as we were told that any F5 camera can be upgraded to an F55, which will give it a global shutter and other key features. How will this happen? We weren't given any details - but we will have them in a day or so.

We also heard that you'll be able to turn the F5 and F55 into ENG-style cameras with the addition of a new kit that will provide a shoulder mount and relocate the controls so that they can be used by a single operator. It would seem that the ARRI Amira has some serious competition.

Some exciting and intriguing news: Sony announced their A7S full frame camera. It's a small device that has an astounding maximum ISO of 409,600. We didn't hear much about the sensor but Gizmodo is reporting that it has a mere 12.2 megapixels, but because these will be bigger, they will work better in low light. We saw some stills from the camera, shot in low light, they were pin-sharp, bright and had an obviously very wide dynamic range. The video, apparently, isn't merely decimated but somehow scaled gracefully from the full sensor resolution - so hopefully no moire.

Video output from the sensor is up to 4K. It's not recorded on board, but will need an third party external 4K HDMI recorder. There is news about this as well but it is under embago until tomorrow.

It's beginning to feel like Sony has a very solid foundation to underpin its content creation strategy. Whatever the scale of the operation, if you peel away the paint, plasterboard and bricks, what you'll find is Sony in every part of the operation.

As if to emphasise this point, they announced Sony Content Distribution Services, which is made up of Sony's Media Backbone - an in-depth set of services and standards that orchestrate an entire production facility, Sony Archive - which incorporates Sony's Optical Media Archive, a storage system with a lifespan of well over 50 years, and Sony Ci, a Sony-developed cloud production system that's evolving before our eyes and which is already gaining traction across a whole spectrum of users.

This was a press conference about paradigm change. The change to 4K. The change to the cloud. And the change to products not as immutable objects but as platforms to be built on. In other words: buy our products and we'll keep them current. This makes sense commercially and technically.

And another new sign of confidence from Sony: the confidence to say "we're not going to lock you into our formats". They confirmed that with a hardware upgrade: you can add third party codecs (initially ProRes and DNxHD) to their cameras.

This would have been unthinkable even a year ago.