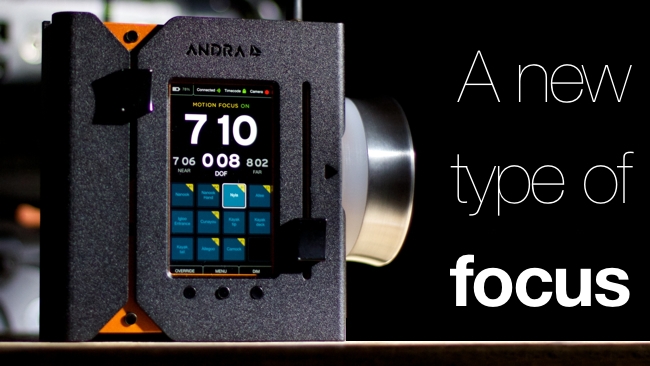 With big sensors and narrow depths of field making for increasingly demanding shoots, here's pretty much the ultimate answer to focus-pulling nightmares. It really does look like a revolutionary device!

He explained to us:

The system is essentially a hybridization of a motion capture system and a remote focus pulling system.  Using a portable and easy to set up magnetic mo-cap system we're able to very accurately track subjects and cameras in real time and use that data to drive a lens control motor.  The mo-cap side of the system uses very small sensors which can be mounted to the performer beneath clothing, just like a lavalier microphone.  The user can then decide where they want the focal point, relative to that sensor, and the system does the rest. We are able to get very impressive accuracy which, most importantly allows you to get really crisp eye focus.  We don't just target the general area of a person, we get the focus right where you want it.

There are two ways to interface with the system.  The basic approach to use an iPad, which opens up a whole new world of creative options.  Another option is to use the hand unit (The Arc) which is similar to hand units currently on the market except that it has a touch screen interface and offers an incredible range of new features, like the ability to simply sequence between desired focal points by simply hitting a button or turning the dial back and forth.

The system can also be used to "save" positions of non moving objects in any given area, and, for dyed in the wool focus pullers who want to do it all manually, the hand unit streams live distance data of any chosen subject or object whether it's moving or stationary.  Basically it's like having a Cinetape on several objects at once.  You can choose to let the system pull focus for you, allowing you to simply decide when and how fast to move between subjects, or you can just use the data to pull manually.

The system will work with any cine lens:  that is to say, any lens that has focus gears.  Each lens needs to be calibrated once and then it can be stored in the app.  There is no limit to how many lenses you can store.  So far we've tested the system on Cooke, Zeiss, Canon and Rockinon lenses, but we see no reason why it won't work on any cine type lens.  We're also hoping to begin working with lens manufacturers to start building a database of lenses and make sure we can find ways to continue to optimize system performance.

I have been teaching film at NSCAD University in Canada for ten years now.  After watching my students struggle with focus for many years I decided there had to be a better way to deal with this technical challenge.  I spent about a year in working in the lab on a proof on concept, and began working very closely with a one time NASA programmer, Mike MacDonald.  We were able to really prove that the technology was finally here to allow a system like this to work, but there's a long road between proof of concept and final product.  That's when we got together with technology research and development company, Sunsel Systems, which is helmed by Julian Taylor and Jeff Levy, and after climbing a veritable mountain of technology, we're finally ready to show the world what we've been working on.  It was about four years from concept to where we are now, and we hope to start shipping units in September. 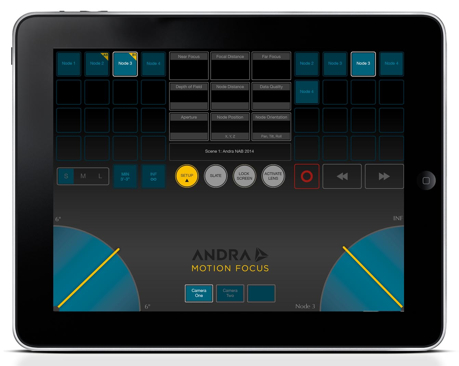 Making this system work wasn't nearly as easy as I thought it would be.  Firstly, I don't think I ever clued in to just how precise focus has to be.  We made a decision really early on to do all our testing on wide open lenses, which was the right choice, but it didn't make our lives easy.  With wide open lenses you're often in the 5mm range for tolerance.  Getting clean data down to that level of accuracy is only half the battle, because right away you're into problems of data lag.  A human can anticipate, usually because they've had a rehearsal, but a machine can't, so that means it has to be really fast.  Our initial design simply had too much lag, which meant that even a person walking at a moderate speed was always slightly behind, and therefore slightly soft.  This is where Jeff Levy and Julian Taylor, owners of Sunsel Systems, were able to make the difference.  We went right back to the drawing board and built a whole new system.  When tracking a moving object Lag is now nominally at 75 milliseconds - which is basically imperceptible- and we're pretty sure we can get it lower still.  If you consider that even high end focus systems on the market currently have a lag in the same range, and all they're doing is turning the dial with no data processing at all, then you get a sense of how optimized the system is.

We're offering early adopter pricing at NAB.  We expect the hand unit and control box starter pack, which gives you a mo-cap ready FIZ system to be in the $7900 range. (motors not included)  A starter system ideal for low end users with full mo-cap features should be about $12,000.  The system is scalable, so the bigger your system, the larger the motion capture range can be, but you can start small, get used to the system and let it grow with you over time.  Like I said, these are early adopter prices and like all new technology prices, are subject to change.

Pieces involved in the system are:

Sources:  these 4 inch by 4 inch cubes emit a magnetic field which creates the capture area.  Multiple sources can be arranged anywhere in the shooting area, or mounted on a custom made Rycote (do you know Simon?) boom pole.

Hubs and sensors:  Small wireless RF transmitters with wired sensors that can be mounted to the performer.

Motor Controller.  (Embarrassingly we still haven't come up with a good name for this.)  This is very much like any motor controller, except is has a very powerful computer built into it.  It's  a serious piece of tech that has timecode, large distance display, FIZ ready.

Arc Hand Unit.  - Again, similar to any wireless hand unit with a focus dial, for focus pullers who want to have both traditional and Motion Focus on the go at the same time.


Perfect for commercials, product shots, interviews, and anyone wanting to get a taste of the full range of features offered.  This single source system gives a 16 ft diameter range which is perfect for smaller sets and close up work.  Place the source anywhere in the shooting area and you'll have access to fully automated focus tracking.   With two sensors and one hub you'll be able to track a single performer, or use the sensor to create up to 16 fixed focal nodes.  Additionally you can mount the source directly on a camera, (or buy the optional boom pole) and be ready for walkabout shots at any aperture.  And don't forget, you'll also get the full power of the Andra interface, with rock solid fixed focal distances and the versatile sequence slider functions.  You'll also be well on your way to owning a full FIZ system, which you can control right away with the free iPad app, and be ready to upgrade to the Arc focus dial when the mood takes you.

Our recommended standard package is a surprisingly powerful system at a manageable price.  The totally mobile double source boom pole gives you an effective 24 x 16 foot range, which is big enough for most location shoots and really allows you to sink your teeth into some advanced shooting options.  It's quick and easy to set up, and can be rigged quickly on a c-stand or simply hand held, for on the go shooting.  With two hubs you can have two performers in play, or really let loose with mobile camera work.  This option also gives you the full feature set of the app, letting you create and track up to 16 fixed nodes, or three moving nodes and 13 fixed nodes.  This versatile system is perfect for commercials, interviews, medium size sets and locations and a variety of on the go situations.

For the serious film maker, this is the system of choice.  With our lightweight Rycote carbon fiber grid, this system gives you a quick to set up, user configurable 600 square feet of Motion Focus coverage, suitable for most any situation.  With four hubs you can track three moving performers and a moving camera at the same time with absolute ease.  Suitable not only for traditional cinema, but great for live performances, newsrooms, and anywhere else where you want focus to be perfect!