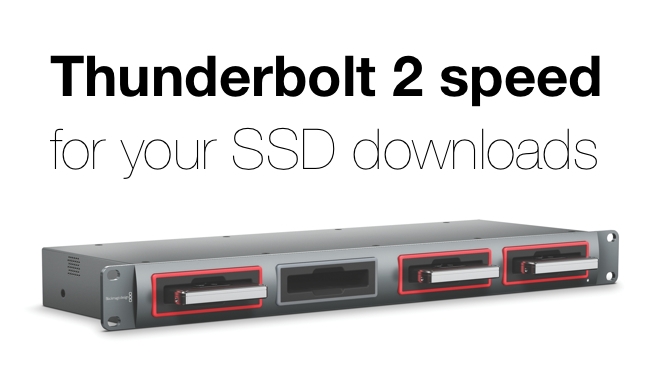 Thunderbolt 2 is not only capable of carrying a 4K video signal, but it's fast for storage too. Here's Blackmagic's latest effort to bring Thunderbolt 2 goodness to your SSD workflow

Blackmagic is never slow at spotting a trend, and then getting behind it and giving it a positive push. They've obviously noticed that video cameras, especially the ones that record raw video, are moving towards using SSDs as their storage medium.

In the case of this particular trend, it probably wasn't hard for Blackmagic to identify: it's their cameras that are probably accounting for a very large proportion of SSD in film making!

SSDs were never intended to be used like storage cartridges. There are relatively few peripherals around for attaching them to a computer as removable storage. That's where the new MultiDock comes in.

The idea is to provide a way to transfer data from up to four SSD devices using the new, fast Thunderbolt 2 protocol. Although Thunderbolt is a rare sight in the PC world (upgrade cards are available) it's now pretty much universal in the Macintosh domain.

Which means that if you're an Apple user you now have access to a staggeringly fast, but easy to use, way to connect storage to your computer. With the Multidock, you'll even be able to "edit in place" without even having to copy your material across.

But there's more to the MultiDock than that. Because it can also be part of a RAID system.

You can not only RAID up to four SSDs within a single MultiDock, but you can daisy-chain them together (there are two Thunderbolt 2 connectors on each Dock) for a total of twenty four disks on a single connection.

Blackmagic has provided drivers for Windows and OS X.

Read the Blackmagic Press Release in full after the break

Compatible with existing Thunderbolt computers, MultiDock features advanced Thunderbolt 2 technology for blazingly fast transfer speeds at up to 20 Gb/s. This means customers get super responsive editing and color correction directly from source disks and avoid slow file copying. The new Blackmagic MultiDock also includes a loop thru so users can connect up to 6 devices with a single Thunderbolt connection. This means customers can build SSD docking stations with up to 24 slots or incredibly fast disk arrays consisting of up to 24 disks all striped together on a single Thunderbolt connection to the computer.

“The Blackmagic MultiDock is a fantastic solution to managing storage in a busy broadcast or post production environment. Now with Thunderbolt 2 technology you get amazingly fast transfer speeds of up to 20Gb/s, that’s enough bandwidth to easily handle the highest resolution video formats. It’s fantastic when using disks independently or when striping them together as a large disk array ,” said Grant Petty, CEO, Blackmagic Design. “Blackmagic MultiDock is an incredible solution to the problem of managing disks and the amazingly fast transfer speeds will make editing, design and color correction even faster!”