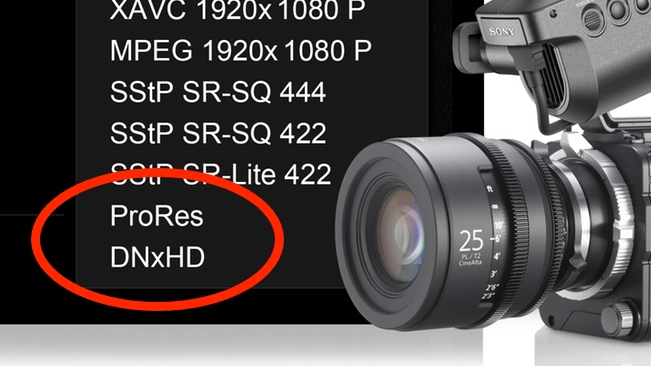 We don't think anyone was expecting this. This is such a NON Sony thing. Sony has just announced on their Community website that the Sony F5 and F55 will be able to have a hardware upgrade to two of the most popular post production formats: ProRes and DNxHD

Unless we're completely mistaken about this, it's sensational news. If this was April the first, we wouldn't even give this a second glance.

Because Sony has always promoted their own formats. They have a history of inventing their own "standards" and then sticking to them, replacing them eventually with new "Sony Standards".

Some professionals have thought them overly proprietary in doing this but Sony has stuck to this policy and has created rich and highly usable ecosystems based around their strategy. However annoying it might have been for to be stuck inside Sony's proprietary system, there have been huge advantages to having every aspect of the workflow "in-house". And - especially with XDCAM - this is a way of thinking that has worked well.

We didn't think we'd ever see this

All of which makes today's announcement even more surprising. We honestly didn't think we'd ever see this.

Why have Sony chosen to do it? There's no explanation at the moment apart from a bare-bones statement which starts off by lauding the virtues of XAVC, the codec that was launched at the same time as the F5 and F55 in October 2012. All the detail we have is this, single sentence:

"Our mission is to continue developing the most feature rich cameras on the market. In so doing we are excited to announce support for ProRes and DNxHD codecs as a future hardware upgrade option for both the F5, and F55 cameras."

This announcement invites speculation, the first and foremost of which must be that Sony has spotted a trend with both Blackmagic and ARRI offering ProRes as an in-camera format. Certainly, with ARRI, this has given them a massive boost in TV and Drama production as the ProRes workflow is so easy to adopt.

DNxHD capability will give instant camera-to-NLE workflow compatibility with the Avid: surely a significant feature.

We'll watch for more details on this.

Meanwhile, if you're still wondering what ProRes and DNxHD are all about, here's our guide to using them. Meanwhile, read Sony's Peter Crithary's full statement after the break

Announcing ProRes and DNxHD support for both F5 and F55

Sony has been at the forefront of, and has vast experience in developing advanced compression technologies that led to the visually lossless HDCAM SR, a standard in the production industry since 2001.

Based on our knowledge and experience in this area we then selected the highest Level and Profile of the H.264 standard as the core compression technology for the F5, and F55 cameras. Named XAVC, it offers exceptionally high quality, with the ability to scale from HD, 2K to 4K with very modest data rates, and with frame rates up to 180fps.

XAVC has proven robust, and is well accepted by “mission critical” genres such as Episodic Television, Documentary and feature film. The adoption of XAVC by commonly used platforms has been exceptionally fast, and as a result XAVC is supported by all major workflow applications in the fields of editing, grading, transcoding and media management.

Sony is firmly committed to the continued advancement of the XAVC codec with exciting developments planned for the future. Sony is also committed to our customers and with your feedback the need for diversity and flexibility to support codecs that have been used in our industry for some time.

Our mission is to continue developing the most feature rich cameras on the market. In so doing we are excited to announce support for ProRes and DNxHD codecs as a future hardware upgrade option for both the F5, and F55 cameras.