Major new feature: Daring to be different - our in-depth look at the Digital Bolex D16 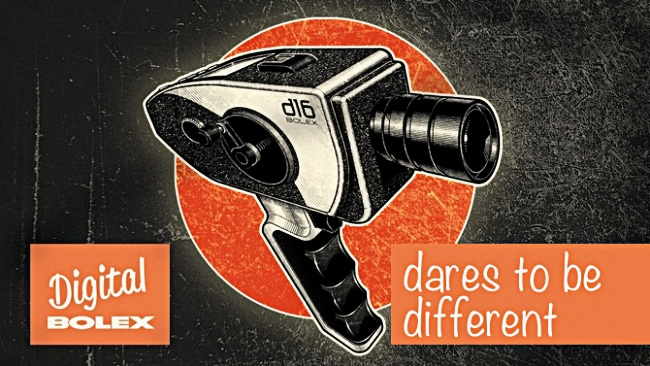 Digital Bolex dares to be different

Is it a camera or an Objet D'Art? Is it both? This is in equal parts a story about design, business and technology. It's about a sucessful ambition to create something new, different and good. RedShark's Peter Haas owns a Digital Bolex D16 and has some very illuminating observations about it.

Simply put, Digital Bolex got it right. Delivering the first 100 cameras may have taken longer than anticipated, but the results of their labor should not be short-changed. From the images produced to the physical look of the camera itself, the D16 is a complete product.

Let's begin with pure surface aesthetics. There has been much said about the "retro" design of the camera. It is true, this camera was certainly designed in a way that is very mindful of the past. The black and silver design, trigger pistol grip, and even the leather carrying case do conjure up the spirit of "Bolex."

Yet the camera is obviously not a simple re-molding of a by-gone product with digital guts; it is the result of some seriously intelligent design work that is willing to take the risk of riding the fine line between invoking the past while at the same time still proclaiming a modern product. This goes for all the products in their lineup. Even the design of the packaging, manual, the software, and dare I say T-shirt apparel make you stop and think "Oh, yes. Obviously this came from Digital Bolex." The branding work across the board is spot on.

In a time in which most cinema cameras with similar specifications appear to be a brick with buttons (or a touch screen) Digital Bolex made something completely different. The D16 as an object is a beautifully crafted work of desirable art.

The design isn't all for show. The form factor is extremely practical; one of the things I really love about the D16 is how you can take it out of the bag, add a lens, and start shooting. You don't need to run out and drop loads of cash on expensive rigs to do basic shooting.

The camera arrives with a detachable pistol grip that has a working trigger mechanism on it. The grip fits well in my hands and the trigger works akin to the old HR16: pull the trigger and you're rolling picture. Let it go, you stop rolling. After years of becoming used to pushing a red button it was something of an adjustment switching to having to holding down the trigger. Sense memory quickly clicked in and using the trigger feels very natural.

Even with larger lenses attached, the weight of the camera is very well balanced and is easily hand-held. That' being said, if you plan on shooting with anything more zoom than a slightly wide portrait lens (on this camera anything above, say, 35mm) and want to shoot hand held, I definitely recommend using some sort of stabilizer, but this holds true for pretty much any camera that isn't naturally shoulder mounted.

One trick I did learn while shooting the Peter Pan Bakery documentary was using the grip as a sort of impromptu shoulder rest. I was using a Zacuto EVF mounted to the side of the camera and found that I could easily push the camera into my shoulder, using the pistol grip as a contact point and still maintain a solid grip on the camera. It's great in a pinch!

Under the hood, the D16 is equally impressive.

Part Two: This Camera's Got Guts

In my mind what sets the D16 apart from many other cameras is the enthusiasm with which the Digital Bolex team extended this "whole product" concept to the very core of the camera's guts. They made a number of conscious design choices that had to balance cost and aesthetics.

This can be a huge risk, especially for a small start-up company. Too much focus on one facet and your product becomes exactly what you want ("it has the perfect look," or "perfect form-factor!"), at the expense of failing at market because the costs of making the "perfect product" has rendered it unaffordable. Or on the flip side of that coin you have a company that is only focused on the technology / price that they forget to add any personality to the product. Digital Bolex, again, achieves a great balance here.

A great example of this is choosing to equip the D16 with a CCD sensor over what has becoming the more increasing standard CMOS.

The CCD chips are more expensive than CMOS in both production and development costs, but they play a huge role in the distinct look and feel of the footage. From the start, Joe has been very vocal about the their choice of a CCD chip:

The D16 does in fact lack the rolling shutter problem and this is a huge sell for me. A common complaint I had with many otherwise great cameras is the unmistakable "Jello-vision" that occurs when you're doing even basic pans. This is absent in the D16's image, and when shot with a proper 180° shutter, the motion blur on even abrupt zip-pans is very pleasing.

CCD chips require more programming and calibration than their CMOS counterparts. This allowed the Digital Bolex Team to essentially started from scratch and calibrate the way the sensor captured the image and with intense scrutiny define the image they wanted the D16 to produce. Here, that meant creating a filmic image that Joe found comparable to S16mm. Joe explained in a blog post that this was a long process and complex process:

"The process of balancing such a complex system is extremely difficult. There are matrices of numbers that control each of the processes and malleable aspects of the sensor. There are settings for white clip level, black clip level, overall gain, read out levels for RGB channels, timing settings, and on and on. When you adjust one setting it often throws two or three other settings out of whack. It is a very trying process."

The resulting image has an extremely customized and beautiful look. Having shot with the camera for several weeks, I've found myself loading the footage into LightPost and being very pleased with the images even before applying any color grades.

Part Three: summing it up

As I stated in my initial impressions review, this camera has a strong build. The removable mount is a fantastic idea. It's one thing to be able to chose your lens type, but even more impressive to be able to modify the camera on your own depending on the lens situation you're going to be working with.

This being said, the mounts that are currently being designed for the D16 are passive, meaning you can only use lenses that have a manual aperture ring on them. What this says to me is that the D16 was designed for use cinema lenses not the DSLR lenses that are migrating to motion picture use.

Now, you can still uses these DSLR lenses. If you bring along a DSLR with an active mount you can change the iris settings on the DSLR and then pop the lens on the passive D16 mount. This workaround is fine for highly planned shoots like commercials and narratives, but isn't very helpful for many forms of documentary shooting.

Finding wide lenses for super-16mm camera sensors can be a challenge, as many companies have been developing for full-frame DSLR cameras. But with cameras like the Digital Bolex, Black Magic Pocket, and a number of other digital s16mm cameras hitting the market, this is likely going to change. There is already a lot of c-mount lenses out there that will cover this sensor, and once additional mounts arrive the catalog of glass will greatly increase.

Aside from the super-sharp modern glass, and depending on your project, you might want to consider grabbing a handful of some vintage primes. If you're the type of DOP that is open to experimenting, you'll find that these older lenses have a wonderful personality and create a very interesting image. This fits in I think with the spirit of the camera as well. It's not designed to be a point-and-shoot, it's designed for people who are going top plan their shoots and lenses are a huge part of that.

The LCD screen is small, and good for basic framing and operating the menu. There is a punch-in 1:1 to help with focus, and a non-debayer color mode to give you a little assistance in exposure. While shooting anything serious I found myself always using an EVF, which isn't a big adjustment for me. I know there have been some complaints about the EVF, but it's important to consider the price-point of this camera, and how that would have to be adjusted in order to supply a higher-resolution screen. Personally, I never found the screen's limitations to be a hindrance.

The internal battery life on the D16 is very reasonable. We were able to get about 3 hours of rolling time with the camera before switching over the Switronix PB70. With the PB70, we could easily roll all day without any concern.

We elected to always shoot with the camera's internal enterprise class SSD drive instead of CF cards. Having used the camera for a number of weeks now, I can say that I've never experienced any issues with this.

Post work with the D16 is straightforward. You have to process the CinemaDNG files before bringing them into your editing software.

I did find that with the current firmware, applications like DaVinci weren't able to read timecode from the clips.

Who Is This Camera For?

This camera functions really well at as digital cinema camera. That being said, not everyone who is used to picking up a DSLR or DV camera is going to be able to start shooting right away. The Digital Bolex D16 is a camera designed by creative and professional camera people for camera people.

The Digital Bolex D16 lives up to the phrase "Digital Cinema Camera" and I'm excited to see how the camera and the company evolve!