Sony and Panasonic working together on Archive Disc Format

Last year I wrote about Sony's Optical Disc Archive systems as an alternative to LTO tape archive solutions. Now Sony have announced that they are working together with Panasonic to develop the next generation of Optical Discs to be used in their archive systems

Here is the full press release:

Sony Corporation ("Sony") and Panasonic Corporation ("Panasonic") today announced that they have formulated "Archival Disc", a new standard for professional-use, next-generation optical discs, with the objective of expanding the market for long-term digital data storage*.

Optical discs have excellent properties to protect themselves against the environment, such as dust-resistance and water-resistance, and can also withstand changes in temperature and humidity when stored. They also allow inter-generational compatibility between different formats, ensuring that data can continue to be read even as formats evolve. This makes them robust media for long-term storage of content. Recognising that optical discs will need to accommodate much larger volumes of storage going forward, particularly given the anticipated future growth in the archive market, Sony and Panasonic have been engaged in the joint development of a standard for professional-use next-generation optical discs.

These efforts resulted in the formulation of "Archival Disc", a new professional-use next-generation optical disc standard, for which the technology roadmap, logo, and specifications are outlined below. 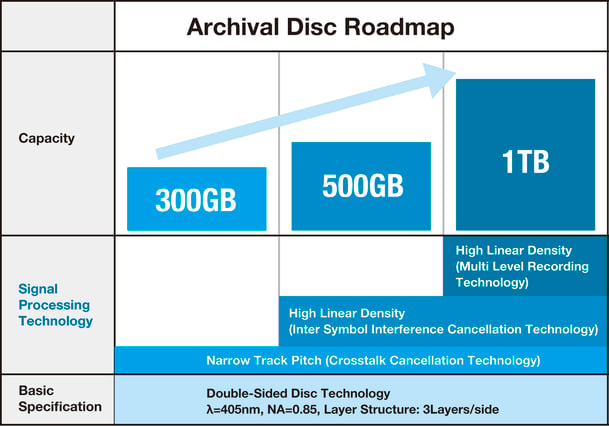 Both Sony and Panasonic aim to launch systems with a recording capacity of 300 GB per disc from summer 2015 onwards. In addition, both companies plan to leverage their respective technologies to further expand the recording capacity per disc to 500 GB and 1 TB.

In recent times, demand for archival capabilities has increased significantly in the film industry, as well as in cloud data centres that handle big data, where advances in network services have caused data volumes to soar.

Both Sony and Panasonic have successful experience working on the development of Blu-ray Disc™ technology. The two companies plan to actively promote this next-generation high-capacity optical disc standard in the professional field in order to offer an effective solution for protecting valuable data into the future.