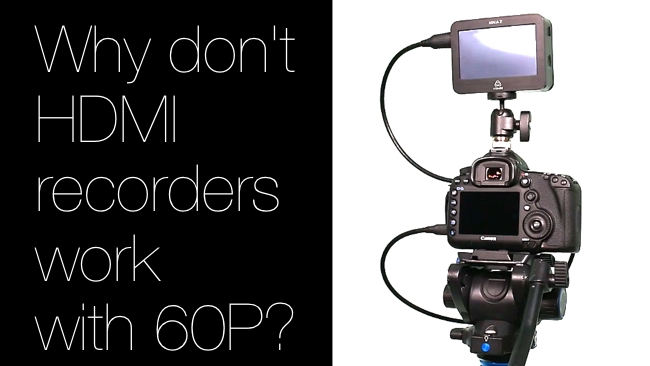 60p recording seems like a strange omission from HDMI recorders. But there's a reason, explained here

We recently ran an article about the new Atomos Ninja Blade, an HDMI recorder that has a high quality screen for use as an Electronic View Finder. In our view, it's a very good product for the price. But there's one feature missing: 60p recording and playback. Quite a few people have asked why 60p is missing from the feature list; almost as if it's a careless or at least pointless omission.

It's an understandable question when the device is loaded with so many other features, but there's a very good reason why 60p isn't one of them, and the answer sheds a lot of light about one of the main issues in video today: how exactly do you cope with higher frame rates?

First of all, some basics. A framerate of 30 fps is exactly that: it's thirty bitmap images per second. Even though HD pictures are only around 2.5 megapixels each, that's a lot of data to store. Compression helps enormously, and HDMI recorders typically encode direct to ProRes, which at its lowest compression ratio is around 6:1 (where the lower the number, the better - so 50:1 is worse quality than 6:1).

So ProRes is a relatively "mild" compression codec, and this has all sorts of benefits: the main one being that each frame is encoded independently of the others, so it's much easier for editing because the NLE doesn't have to look to previous or following frames to construct the image.

But it doesn't matter how good your compressor is, the fact remains that if you double your frame rate, then you're going to double the data rate as well.

Cheaper end of the scale

Now, when products are designed, especially at the cheaper end of the scale, one thing you definitely won't hear the designers say is "let's build some spare capacity into this thing". What you're more likely to hear is "what's the most we can squeeze out of the lowest cost components".

There's nothing wrong with this approach. Typically, electronics doesn't get slower with age (it might seem to with computers, but that's more because they clog up with software that loads itself in the background, and hogs resources without you realising it). A chip will go as fast for its entire life normally. So as long as a product does what it's supposed to do, it doesn't matter if there's only perhaps 1% spare capacity, because as long as you stay within the limits, everything will still work.

And you may even be able to add new features. A lot of HDMI recorders are based around FPGA chips, which are highly programmable.

Why can't you just change the firmware?

So, why can't you just change the firmware and make it work at 60p instead of 30p?

The answer is that it's the same reason you can't just flick a switch and make a Ferrari move at 400mph instead of 200 mph. There are physical reasons and laws preventing you.

In the case of the car, it's aerodynamics. Air resistance increases as the cube of the area meeting the air. That means that for every extra MPH, it becomes very rapidly harder to push the air out of the way. And at the same time, you can't just rev engines fast and faster. That's why you have a gearbox. And as the gears get higher, the power delivered per rotation of the wheels becomes less. So you have less power to deal with extremely rapidly increasing resistance. That's why a car with 500 horsepower might be able to do 190 mph, but you need one with 100 horsepower to do 210 mph.

In space, where there's no air resistance, you can have a tiny engine, and the only thing that determines how fast you can go is the mass if your craft. But even the most massive craft with the smallest engine will reach very high speeds eventually (limited only, ultimately, by the speed of light, which you can't exceed without invoking Star Trek technology).

With an HDMI recorder, there are two main constraints that don't scale very well: processing and storage.

The FPGAs that we were talking about before get more expensive rapidly as the get more powerful. It's much more cost effective to choose a model that can just - and only just - comfortably perform at a certain level, where that level is normally a maximum of 30p.

If you try to process more frames per second than this, the FPGA won't be able to do it in real time. And for recording, that's a disaster: you'll lose or corrupt frames.

You can certainly buy faster storage, but it will cost more, but the data pathways from the FPGA to the storage will need to be twice as fast as well.

So, to sum all this up: you can't just record 60p on an HDMI recorder simply by adding a menu item for that progressive frame rate and connecting it to a new piece of software. In order to cope with double the data rate, you need to fundamentally change the device, with faster processing, data pathways and storage (you'll typically need twice the capacity as well).

Finally, it's worth noting that not all cameras output 60p over HDMI. If they do, it may not be stable or readable by the HDMI recorder. Some recorders can cope with 60p and with 4K recording, but these have been built to do the job and will be very significantly more expensive than recorders that are only required to work up to 30p.