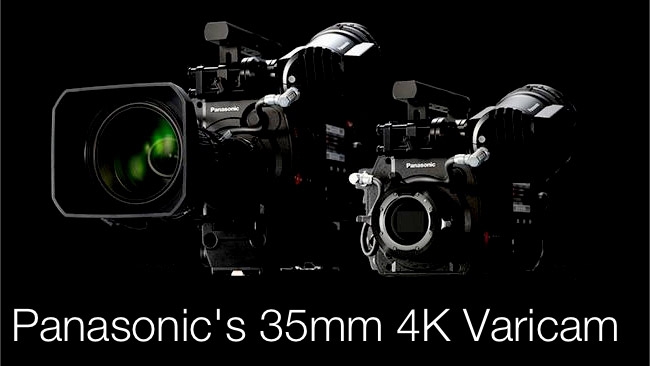 After seemingly years of being behind the curve with 4K, Panasonic announces a stunning new 4K Varicam system, including a Super 35mm sensor. This is a genuine cinema camera in the vein of an Alexa.

Well it’s finally been announced, The 4K Varicam will be making it’s first appearance at NAB! I’m a little surprised that this has been announced the day after London's Broadcast Video Expo as it would certainly have caused a stir if they had made the announcement at the show itself - but then again, everyone was very enamoured with the new Panasonic G4, so maybe they had enough cool stuff to talk about anyway.

The new Varicam is a modular system where the camera head can be connected to dockable recording modules and other accessories. In addition to the 4K Varicam head which has a Super 35mm sized sensor, the new system features a new 2/3“ head for high speed shooting, but sadly this is only a 1080p head. I think Panasonic really missed a trick here, although there are presumably good technical reasons. I was on a discussion panel only yesterday where many of the panelists were saying how much they would love to have a 2/3“ 4K camera to use with B4 style lenses. This was a real opportunity for Panasonic to offer something different to the rest of the 4K market and with Panasonic having a long history of high end 2/3“ cameras they could possibly have really made a splash being the first to the market in this area.

But it's pretty big news in any case.

Panasonic is calling the high speed head “The Varicam HS”. It can record up to 240fps in AVC-Intra 100. It’s a shame the top speed isn’t 250fps which is a straightforward speed for those of us in countries where the electricity is 50hz (everywhere in Europe for example). It also supports speed ramping (so you can vary the speed while recording, hence the name Varicam). The camera can record in higher modes such as AVC-Intra 200 and AVC Intra 4:4:4 but only up to 30p.

Returning to the 4K head which Panasonic are calling “The Varicam 35“: the resolution is 4096 x 2160 (17:9) and the camera features a single CMOS sensor unlike the Varicam HS which is 3mos based. This is quite sensible as 2/3“ lenses tend to be designed for 3 chip cameras whereas cinema lenses such as Cooke S4‘s etc are designed to focus on as single film plane (Usually an actual piece of film!), so the Varicam 35 is ready to work with standard cinema primes off the bat. It can record 4K Raw but it can also record 4K, UHD resolution, 2K and even right down to 1080p. Panasonic are claiming a very impressive sounding 14 stops of dynamic range.

The new system seems to have lost the Android module from the prototypes/concepts and now with the small side display and buttons it looks more like a Sony F5 or like the ARRI Alexa. Maybe this is a good thing as it’s a look that is very popular just now but the Android module on the prototypes was intriguing if odd looking. Perhaps Panasonic were worried it would be subject to camera phone jokes!

The 4K varicam has been long awaited. The original tape Varicam was famed for its incredibly beautiful images and was used on a number of smaller movies and on the BBC natural history series “Planet Earth” and “Frozen Planet”. Panasonic also virtually invented the indie digital cinema camera with the DVX100 which was ground breaking at the time for being able to shoot 24/25p natively - not to mention its cinegamma curves and high quality sound with balanced XLR jacks and 48volt phantom power. All this to mini-DV tape! What could Panasonic produce if they made a real high end 4K cinema camera people wondered? Well now we are going to finally find out!

I’m sure we will be writing a lot more about the 4K Varicam as further details emerge, so stay tuned to RedShark!

The new cameras are expected in Autumn 2014 and pricing is yet to be announced.

NEWARK, NJ (February 27, 2014) – Panasonic today made several announcements about products that will debut at the upcoming National Association of Broadcasters (NAB) Show, April 7-10 at the Las Vegas Convention Center. Headlining the news is a pair of the company’s signature VariCam® cameras, one a 4K VariCam that incorporates a newly-developed super 35mm MOS image sensor, the second a third-generation, 2/3” VariCam that features high-speed 1080p image capture of up to 240fps to produce extraordinary high-definition imagery for the most demanding documentary, sports or SFX slow-motion applications.

Both new VariCam models (the VariCam 35 and VariCam HS) boast an inventive design innovation whereby the 4K and 2/3” camera heads are separate from but dockable to the recording module, enabling professionals to switch between s35mm and 2/3” camera heads to best suit their creative needs. Both VariCams include Panasonic’s AVC-ULTRA family of advanced video codecs.

“Building on the esteemed VariCam legacy of breathtaking image rendition and versatile off-speed effects, this next-generation modular design will deliver unprecedented flexibility to users, who can move between the worlds of sports, documentary, and other content creation with extraordinary ease and efficiencies,” said Steve Cooperman, Product Manager, Panasonic System Communications Company of North America.

The Panasonic VariCam: A Legacy of Cinematic Image Rendition

The VariCam 35’s superb image handling in multiple formats including 4K, UHD, 2K and HD make it an unparalleled tool for high-end filmmaking and commercials and episodic production as well as live 4K events. With an expanse of formats ranging from flawless 4K RAW output to more practical 4K, UHD, 2K and HD capture, the VariCam 35 represents a matchless option for premier digital capture

The 4K  and 2/3” VariCam will both use Panasonic’s new expressP2 card for high frame rate recording; each camera is  equipped with four total card slots, for two expressP2 cards and two microP2 cards. Both VariCam models will launch fall 2014, with pricing to be announced.

The 256GByte expressP2 Card facilitates the 4K VariCam 35’s recording of  4K video at frame rates up to 120p, as well as the 2/3” VariCam HS’s 1080 HD recording at frame rates to 240fps. The expressP2 card offers fast transfer speeds (up to 2.4Gbps.), and contains a flash memory error correction system, equivalent to a RAID system, to recover from a failure in a sector, page, or entire block.