4K isn't too early: it's at exactly the right time. Here's the proof... 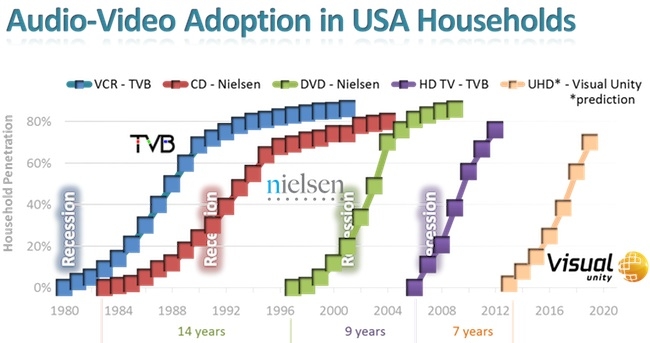 The speed of AV adoption in US households

The graph above has been produced by Gabriel Dusil of Visual Unity and shows something rather interesting: that the adoption rate of entertainment technology is accelerating all the time and, rather than being too early, 4K is arriving at almost the perfect time.

"Entertainment is moving at an increasingly faster pace, and these windows of adoption are shortening with each subsequent technology introduction," he says. "In fact, as shown in [the diagram] looking at the adoption curve of entertainment technology over the past two decades, 4K is arriving just in time."

There are a couple of corollaries. One thing that is worth pointing out is that we're talking about the successful introduction of technology. Before 4K the CE and broadcast industries did rather try to foist stereo 3D on a rather unimpressed public, and between CD and DVD there was the misfire of Video CD. This format was first hamstrung by having to change discs halfway through a movie because of limited data sizes, and then was delivered a fatal blow when CD-R machines came onto the market. Video CD had no DRM technology built in, so Hollywood very quickly stopped releasing titles in the format

Another is that number of sets does not necessarily equal number of viewers. If, rather than the number of HD sets you measure the number of people hooked up to HD services, you end up with a much flatter curve and a much slower speed of penetration.

All the same though it does indicate that the market is ready for 4K. All it needs now is sets and content at the right pricepoint and it should take off, though even then Dusil is one of many that simply sees it as an evolutionary step toward 8K.