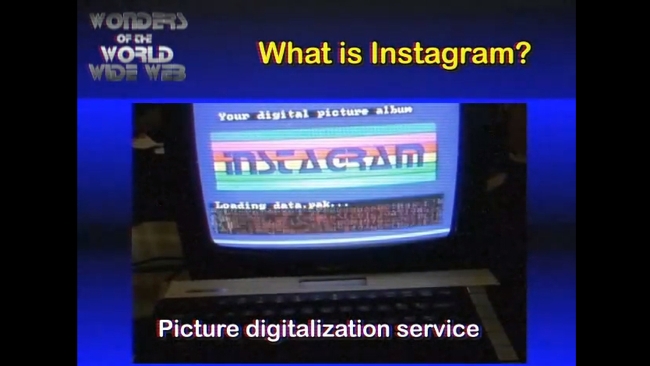 Some of our younger readers will look at this in utter bemusement, but for those of us of a certain age (anyone graduating from university in the 80s would qualify...) this is a valuable historical document

Not because it's real, or anything - it's a complete spoof - but because it's just so accurate. Back then, we thought all this clunky, slow, non-connected computer stuff was awesome (which it was!) but now, it just seems, well, comical.

Watch out for the lovely little details like the dark blue-black gradient on one of the backgrounds which was the same backdrop you'd see when you were loading Windows 3.1. Actually, you'd see it more frequently than you'd want to as you perpetually reinstalled the software to fix driver problems and little irritants like that.

Our favorite little homage to this period of great music and unsuitable haircuts was the audio dropout towards the end of the tape (yes! tape!). One of the endearing characteristics of VHS tape was that stereo audio was stored on the very edge of the medium on tracks about 1mm wide. This, on a format that dragged tape past the head at the speed of a growing fingernail. (The video was recorded by the rotating head, so no speed issue there, but the audio heads were static). Of course, it's the edge of the tape that gets damaged first, as it rubs against the casing. And it lead to audio dropouts. All. The. Time. It was, without a doubt, the worst audio format ever invented.

If you didn't already think that smartphones and the cloud are miraculous, you will after you've watched this!