SSD prices are lower than ever 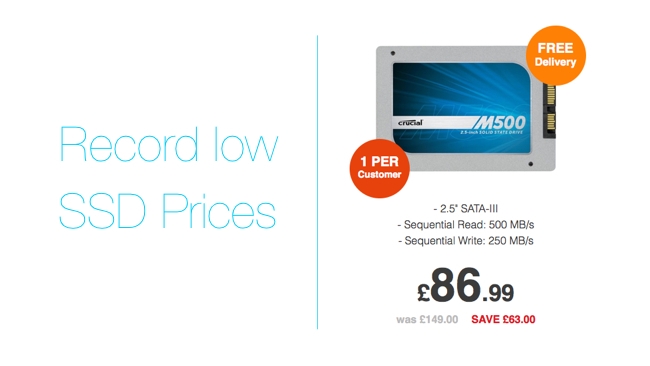 SSDs are becoming cheap as... chips. Where where will it all end?

I was clearing out a box of hard disks the other day. Some of then were even in their original, unopened wrapping, bought for some project that didn't happen or which took another form. The thing is, what do you do with a "brand new", two year old disk? It's probably OK for something but the size and weight and relatively low capacity by today's standards mean that it's probably not going to be worth as much as it costs to send somewhere.

And then there were the drives that I had been using, which were anything up to seven years old. (There were even older ones but I had nothing I could connect them to!) I went through them one by one. I would say that their average age was about four years. Only half of them worked!

I found that quite shocking but not completely unexpected, because it is roughly consistent with what I've heard on the grapevine about old hard disks. It's shocking because hard drives are now so cheap that it's tempting to think of them as perfect for long term storage - like a huge wooden box. But they're clearly not suitable for long term - not unless you RAID them somehow.

But, certainly at the lower capacity end of the scale, hard disks are going to have a hard time, simply because SSDs are so cheap. Admittedly the item in our headline picture was spotted in a special "one day offer", but these things come up pretty frequently so it wouldn't be difficult to get a decent 240GB SSD at around this price if you're prepared to look for it.

All of which means that, surely, the time has come when there's no reason at all to not put an SSD in the next computer you're building - or ordering from your computer retailer. None at all.

It feels like we've crossed some kind of threshold, where the only motor inside your computer is the fan.