This year, our phones are going to be like little Mac Pros 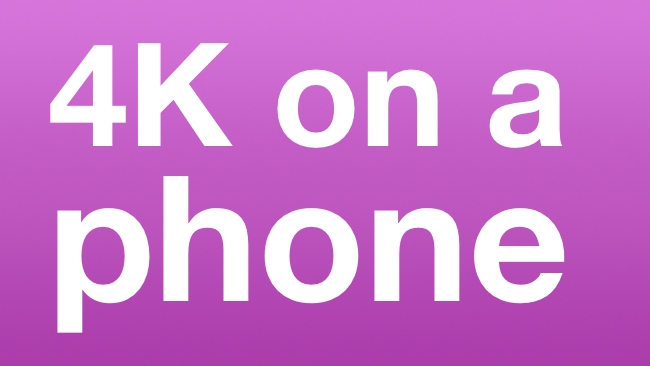 Qualcomm are among the top tier of mobile phone chipset manufacturers, and, like their competitors, they're pushing the boundaries of performance all the time. And they're making their chipsets look like they're more at home in a workstation than a smartphone!

We're still slightly puzzled as to why 4K on phones appears to be such a priority. After all, there are no phones with 4K screens, and, even if there were (we fully expect it in the next year!) the pixel density would be so extreme that the perceived extra resolution (ie very little) wouldn't justify the extra storage demands, nor, probably, the extra battery life either.

So it's probably safe to assume that the main factor driving 4K on phones is marketing. It's the next step after HD. While the quality of any 4K video taken with a camera phone might not stand up too well alongside the output from a Sony F65, at least downsized images will probably make HD look better.

But, all that aside, the specifications for the new Qualcomm Snapdragon 805 chip look more like they're describing a graphics workstation than something you'd find in a mobile phone.  It has a quad-core CPU, and will run at speeds of up to 2.5GHz per core, and it has a memory bandwidth of up to 25.6 GB-second.

Apparently it uses less power when playing video than you would expect as well.

Here's Qualcom's Press release with all the details, after the break.

Qualcomm Incorporated (NASDAQ: QCOM) has announced that its subsidiary, Qualcomm Technologies, Inc., introduced the next generation mobile processor of the Qualcomm® Snapdragon™ 800 tier, the Qualcomm Snapdragon 805 processor, which is designed to deliver the highest-quality mobile video, imaging and graphics experiences at Ultra HD (4K) resolution, both on device and via Ultra HD TVs. Featuring the new Adreno 420 GPU, with up to 40 percent more graphics processing power than its predecessor, the Snapdragon 805 processor is the first mobile processor to offer system-level Ultra HD support, 4K video capture and playback and enhanced dual camera Image Signal Processors (ISPs), for superior performance, multitasking, power efficiency and mobile user experiences.

“Using a smartphone or tablet powered by Snapdragon 805 processor is like having an UltraHD home theater in your pocket, with 4K video, imaging and graphics, all built for mobile,” said Murthy Renduchintala, executive vice president, Qualcomm Technologies, Inc., and co-president, QCT. “We’re delivering the mobile industry’s first truly end-to-end Ultra HD solution, and coupled with our industry leading Gobi LTE modems and RF transceivers, streaming and watching content at 4K resolution will finally be possible.”

The Snapdragon 805 processor is sampling now and expected to be available in commercial devices by the first half of 2014.