Sony Puts the Pressure on GoPro 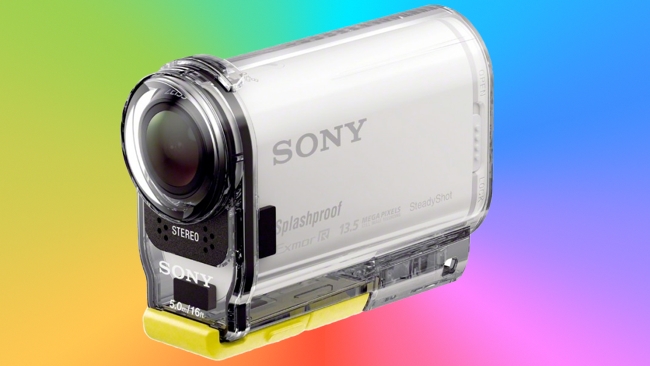 It is safe to say that the POV action camera market is pretty much owned by GoPro at the present time. Sony have now clearly decided that it was about time that the ante was upped and as a result they have now announced an upgrade to their HDR-AS100 in the form of the HDR-AS100V. Simon Wyndham explores

The new camera, now in a swanky new gloss white colour scheme that Sony claims reflects heat to help keep the device cool, features some quite interesting advancements over the previous model, including 50Mbps recording bitrates using the new XAVC-S codec, a new BIONZ X processor, and 24p capability for those who insist upon it. The Exmor-R® sensor has also been upgraded for lower noise and better low light capability.

While it remains to be seen what the noise levels and picture processing are like in practice, the inclusion of a 50Mbps recording bitrate is finally an acceptance by one of GoPro’s competitors that low bitrates should be consigned to the dustbin for the types of high motion footage that these cameras primarily capture.

Slow motion framerate capabilities include 120fps in 720p and 240fps at 800x480p, which also includes sound recording. This is in contrast to an error that was made in the initial press release that claimed that the camera could record 240fps in 720p modes. Other resolutions include 1080p up to 60fps, and stills resolution has also been increased to 13.5 megapixels.

Sony are claiming that the optics have been greatly improved over the previous generation. If the fisheye distortion and chroma aberration of the first version of the camera have been tamed this will be very good news indeed. The digital stabilisation, always a selling point of the AS100, has also been improved with the ability to automatically detect and compensate for different types of vibration and movement.

The initial press release from Sony details two picture profile settings, “Neutral”, which they claim is “similar to Sony’s top professional video cameras”, and “Vivid” which offers a highly saturated look. The camera also has the ability to record timecode for multiple camera synching, and the ability to flip the image during recording for inverted mounting.

Wireless control via a new wristwatch style remote also features, enabling control of up to five cameras. This is a great idea since the remote that is supplied with the GoPro is easily lost or dropped and needs to be kept in a pocket.

The AS100V is splash proof when used outside of the supplied protective case, and fully waterproof when used within it. This means that for many applications the extra bulk of the case is not needed. Sony are also supplying an additional tripod adaptor so that the camera can be used on mounts without the need to use the waterproof case.

The camera comes with an SPK-AS2 case as standard, which allows the camera to go to depths of five metres, while an optional MPK-AS3 case allows much deeper dive depths of up to 60 metres.

If the new camera performs as well in reality as it does on paper I can see GoPro having a few sleepless nights. Certainly if Sony can beat the battery life of the GoPro by some margin there will be a number of converts to the new AS100. Whether Sony can ever beat the GoPro marketing juggernaut is another matter however.

Sony have set up an official website for the camera.