Streaming 4K and even 8K is going to be no problem, thanks to British Telecom 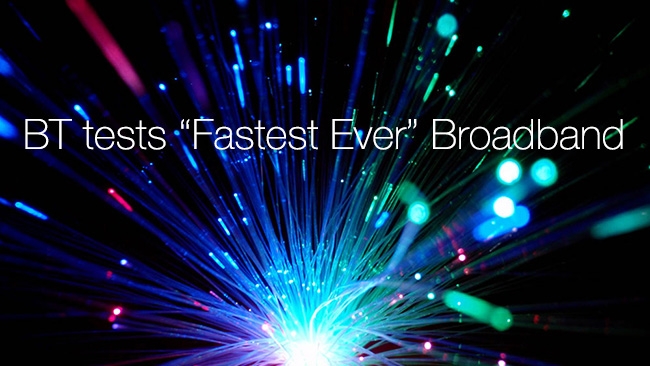 British Telecom (the UK's major telcom and broadband provider) has announced the results of tests made late last year which show that they were able to send data at a rate of 1.4Tb/s over a distance of 255 miles using their existing Fibre Optic infrastructure

I have written before about advances in data rates over fibre optics but these were usually under laboratory conditions. Now British Telecom and Alcatel Lucent have published results of tests they made late last year using the existing Fibre Optic connections between London and Ipswich, a distance of 255 miles (410km)

By aggregating the bandwidth of 7 200Gb/s channels they were able to achieve a stable data rate of 1.4Tb/s, which is equivalent to 175 Gigabytes per second (!)

Normally the frequencies of the Lasers used to send the data would be separated by a fixed amount of 50Ghz but by using a flexible system of assigning frequencies they were able to reduce the separation to 35Ghz, allowing more channels to be sent in the available space, a bit like adding more lanes to a motorway.

Unfortunately, this does not mean we will be getting 1.4Tb/s to the home any day now! However, It does show that the existing infrastructure is more than capable of supporting faster data rates if it is configured correctly.

It is vital that the backbone of the internet has sufficient capacity as we move to streaming HD and 4K content over the web rather than receiving it over the air or on dedicated cable connections. Demand for higher bandwidth is growing by around 35% every year, making the need for more efficient ways to transfer data an important issue for Internet Service Providers, particularly with the growing popularity of data-heavy online services.

According to Dr Tim Whitley, BT's MD of Research  "BT has a long history of leading innovation in telecommunications, from the earliest days of the electric telegraph to today's global fibre networks.These trials continue that tradition,as we work with Alcatel-Lucent to push the boundaries of fibre technology,allowing us to support the ever increasing bandwidth required by our customers, and deliver new and exciting services which rely on fast, data-hungry applications"