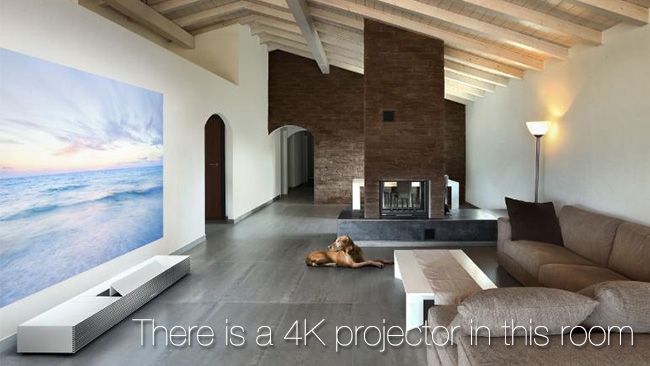 At CES Sony demonstrated a prototype of an Ultra Short Throw Projector that uses Laser Illumination and has 4K resolution, and it even looks stylish.

The first thing about this projector is it uses Laser Diode illumination. We've been waiting for Laser Projectors for a few years now and this is one of the first aimed at the home user. Laser Diodes allow the projector to have a very quick warm up time and use less power and they will last much longer than conventional Mercury Vapor bulbs.

The second cool feature is the Ultra Short throw capability. One of the problems with having a projector in your living room is that typically the projector needs to be at the back of the room, possibly hung from the ceiling, running cables to the projector from your other devices can be messy and expensive. Also anyone walking through the room will cast a shadow on the screen.
Sony's new projector can project an image measuring 147 inches diagonally from just 7 inches away from the wall. Even right against the wall it can still manage an image measuring 106 inches. No messy cables and no more shadows.

The third and possibly most innovative feature is very simple: it doesn't look like a projector.
The projector is designed with matching speakers and cabinets to look like a stylish piece of furniture.
The cabinets can hold other pieces of Audio Visual equipment like your Playstation 4 and all the wires can be tucked away so reducing clutter. This should make it much more popular with those who don't want their living room festooned with cables. (Honestly dear, it will look great ;-)

Of course the fourth cool feature is the native 4K resolution. At 4096 x 2160 this is a full 4K projector, perfect for watching House of Cards season two on Netflix or movies from Sony's Video Unlimited 4K service. You could even watch your home movies that you shot on your 4K Handycam.

There is no model number yet but the projector is expected to begin shipping this summer at a price between $30,000 and $40,000. Well, there had to be a downside.