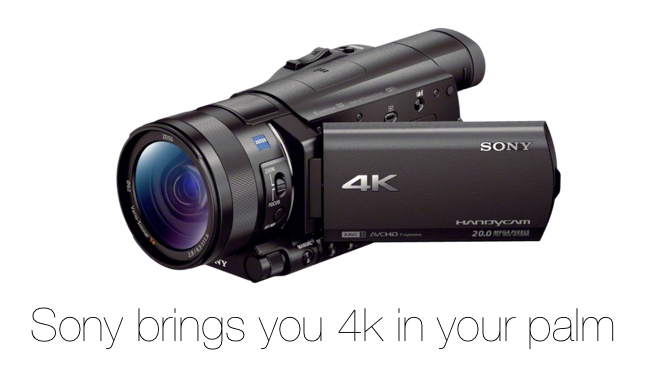 4K camera in your palm

Sony have are touting a new handycam camera as “4K for 2K” as the camera costs $1999. It’s a standard little video camera in the traditional palmcorder form factor but it has a few stand-out features in addition to the 4K capabilities.

The really attention-grabbing feature is the Sony Nightshot infrared recording mode. This has been absent on a lot of Sony’s lower end handcams lately but this camera is capable of 4K infrared: great for filming animals at night and ideal for shooting “Paranormal Activity” style horror movies. it may end up being the major selling point of this camera.

It camera also has a large sensor for a camera of this size. A 1“ sensor is bigger than a 2/3“ sensor: it’s close to Super16 size. This is quite a big sensor compared to what you would normally find on a handycam. Of course, a 4K sensor needs to be bigger.

Sony claims that it comes with Cinematone Gamma/Colour mode but what that looks like we will have to wait and see. The demo video looks more like documentary type footage and perhaps that is where it will find its home, but it may appeal to feature/indie makers as well because of the price.

According to Sony, the camera features a BIONZ® X Processor for 120 fps recording although we've been unable to find out what resolution the 120fps is available at. We'd expect sub 1080 resolution.

The Electronic Viewfinder is a High contrast 0.39" OLED display which is good on a camera at this price. The flip out screen is an 3.5" XtraFine™ LCD (921K) display.

The camera has built-in ND filters: Off, 1/4, 1/16, 1/64, something the FS100 was much criticised for missing, so Sony have obviously listened to their customers. It also has a microphone input and a headphone output but they are both stereo minijack sockets as you might expect on a handycam.

As I suggested earlier, I think the standout feature of this camera is going to be the Sony Nightshot function. Sony’s Nightshot was always popular but it is hard to find these days even on 1080p handycams. The return of Nightshot - and in 4K too - will send people rushing out to capture footage of those badgers, or even ghosts!

Footage from the camera after the break