Should you buy a new Mac Pro now or wait? Here's a detailed guide 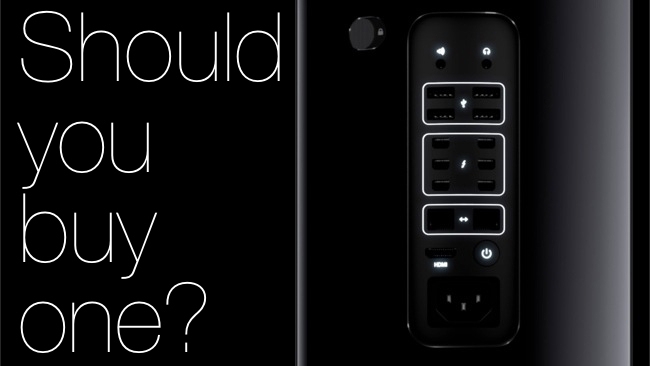 Should you buy a new Mac Pro?

The Mac Pro's (sort of) available now. Assuming you can lay your hands on one, should you get one now, or should you wait. A lot depends on your NLE

We're publishing a few articles on different aspects of possibly the most important new computer for a decade: the new Mac Pro.

Recently, I wrote a business framework for deciding whether to buy an iMac or a Mac Pro. The analysis could easily be extended to a PC or a hackintosh, but I wanted to keep it simple and topical. This post was pretty widely read, so I thought I'd do a follow up post for those who are leaning towards buying a Mac Pro.

If you've decided a Mac Pro is in the cards for you, one of the next big decisions is when to buy it. Should you drop your money before the holidays, or wait and let other people be the guinea pigs.

In large part, the answer depends on what NLE you are using, what plug-ins you depend on, and what other non-Thunderbolt peripherals you need to use.

If you are exclusively using Final Cut Pro X, then you probably don't have much to fear from your main creative tool. In fact, the new release of Final Cut Pro coincided with the release of the Mac Pro, so you'll be set to immediately take advantage of an NLE that is optimized to take full potential of Apple's latest hardware.

The new version of Final Cut Pro X  has been engineered to take advantage of the 4K capabilities of the Mac Pro. The dual workstation-class GPUs in Mac Pro accelerate effects, optical flow analysis, video export — and virtually everything else you do in Final Cut Pro.

You will have the benefit of working with a fully integrated software / and hardware platform. That being said, there may be reason to wait a little bit. You should check to make sure that the other creative software that is a regular part of your workflow has been tested with the Mac Pro and Mavericks. If it hasn't been tested, you'll want to look for some indication from the developer of when you can expect updates required to take full advantage of the Mac's hardware configuration.

The other reason you may want to hold off is that by waiting you can get some feedback from others about what upgrades provide the biggest bang for the buck. Larry Jordan has some thoughts, but he is the first to admit that nothing beats real world testing and benchmarks. Heck, even Larry is going to hold off for a little while and let some others fearlessly blaze the trail before him.

The argument against waiting of course is that you want it now, and you don't mind spending some time tinkering to make sure everything works. If you are one of these people, then please be kind enough to document and share your experiences with the rest of us.

If your workflow depends on Premiere Pro, After Effects, and SpeedGrade, then there are a couple of additional things you should consider before handing over your credit card to Apple: Mavericks and the AMD FirePro GPU.

It's quite possible that Mavericks and the AMD GPU will work perfectly with Creative Cloud apps on day 1, but there is some risk that they won't. This is after all an entirely new computing platform and it's unclear how much time Adobe has spent with the pre-release hardware.

I have no doubt that Adobe will do its best to optimize its software to take advantage of the new hardware and that it will do this as fast as possible, thankfully lengthy release cycles are a thing of the past with Creative Cloud, but it could still take awhile. Your decision about timing is really going to be based on how badly you want to be a trail blazer.

The official word from Adobe is that it worked with Apple to test the Creative Cloud and CS6 applications for compatibility with Mavericks on Intel based systems before it was released. All of these apps are officially supported by the OS.

After Effects users initially had to install a different version (12.0.1) to address compatibility issues, but that's a thing of the past. All users are now encouraged to update to Creative Cloud 12.1. There are still people reporting the odd glitch with Creative Cloud and Mavericks, but it sounds like most of the problems are actually plug-in related.

So, if you use Creative Cloud are going to get a Mac Pro, then you will want to make sure that your key plug-ins are certified to work with it. There were some issues with Red Giant in early days, but as of November 8th, it said that all of its products were good to go in Mavericks.

The bigger question around the Mac Pro and Creative Cloud is how well the software will take advantage of the dual FirePro graphics processors when it initially launches, and how long it will take for Adobe to Certify the particular cards that Apple is using.
It's still a fairly common misconception that the Mercury Playback Engine requires NVIDIA CUDA technology. This comes from the fact that the GPU optimization of Mercury initially only supported the CUDA architecture.

Adobe has worked hard to improve the Mercury engine, and it now offers support for the OpenCL architecture in addition to the CUDA for both Mac and Windows. What this means is that a long list of ATI graphics cards have been officially certified by Adobe for Creative Cloud.

Currently the only Adobe Supported AMD graphics cards for GPU acceleration on Macs are the AMD Radeon HD 6750M, and AMD Radeon HD 6770M. That being said, Adobe has certified the FirePro W7000, W8000, W9000 for Windows, and these cards look very similar to the custom processors that Apple is using in the Mac Pro.

So getting back to the question of performance, it looks as if Adobe will be able to take full advantage of the Mac Pros dual GPU configuration. In his blog post about about Apple's Mac Pro, Premiere Pro Product Manager, Al Mooney noted his excitement for the new hardware and confirmed that:

"Premiere Pro CC has support for multiple GPU configurations on export (only one is used during playback) so having more than one GPU will speed up your output times. This means that – you guessed it – Premiere Pro will utilize the dual-GPUs in the new Mac Pro when exporting to an output file"

Things sound quite positive performance wise. In terms of certification, hopefully the fact that Adobe has certified similar cards for Windows will help ensure a fast turn around. Even without this certification, you can run cards that Adobe hasn't yet blessed by enabling the card in the Project Settings for Premiere Pro. According to Al Mooney,

"a warning message will appear letting you know that your card has not been certified by Adobe, but once that dialog is clicked through you can use your GPU."

So why would you want to wait if the story sounds this good? Because it's still a story. Waiting a little while will mitigate the risk of making the wrong decision, and it means that you won't spend time fixing problems and reporting them to Adobe. You'll be able to concentrate on doing paid work while Adobe makes whatever changes are required.

If Adobe were my primary NLE, I would probably wait to see some benchmarks before pulling the trigger on the new system. It would be good to see how performance stacks up against other Windows or Hackintosh machines using high-end NVIDIA GPUs, since much of what you are actually paying for with the Mac Pro is the dual GPU configuration.

The good news, is that the hard numbers will show up quickly, and supporting the new computer will likely be a major priority for Adobe, so I wouldn't expect a long wait before you experience screaming fast performance.

When should you purchase a Mac Pro? When Avid tells you to.

As of November 14th, Avid was not yet providing OSX Mavericks support. In its own words:

Given that this totally new hardware platform comes pre-installed with Mavericks and is optimized for it, I think you would be setting yourself up for a world of hurt if you were to try installing an older version of OS X just to use Media Composer.

On the GPU front, from what I've read you are better off using NVIDIA graphics cards with Avid. Media Composer doesn't list any ATI cards in its system recommendations for Windows and only recommends ATI Radeon cards as supported by Apple on the Mac.

Will things change? It's possible that Avid will do what it takes to ensure Media Composer takes advantage of the new Mac Pro, however, this will take time. If this is your primary creative tool, I would wait until there is an official word from Avid about certification and I would wait until there are some solid performance benchmarks. In the meantime, there are plenty of PC options that may suit your needs.

Other Software and Hardware

Once you've considered your NLE, you'll definitely want to make sure that the other plug-ins and software that are important to your workflow work with Mavericks and have a roadmap that indicates whether the software will take advantage of the Mac Pro's power.

When it comes to the Mac Pro, we know that DaVinci Resolve 10 will take full advantage of the AMD GPUs, but details on other popular tools are scarce. Vendor sites and Creative Cow are a good bet for researching support.

You can also check out these plug in-guides to help research Mavericks support from your favorite tools.

For your existing IO hardware, you should probably look through the different vendor sites to see what you can glean. If you have PCI cards that you want to use, you'll want to check out Thunderbolt expansion bays, as well as, any other Thunderbolt capture & playback, audio, and storage hardware that you may need to complete your setup. Two good guides for reserching your options are listed below:

Unless you need it now, or unless you love to tinker, you may want to wait awhile once the new Mac Pro is released. You can take solace reading benchmarks and discussions about other people's experience. When you do pull the trigger, you'll be confident knowing that you won't waste too much valuable time troubleshooting and getting setup.

By Guest Author, Chris Potter, who is is co-founder of cloud-based video collaboration and sharing service ScreenLight. Follow him on Twitter @screenlight or check out his blog http://www.screenlight.tv/blog.