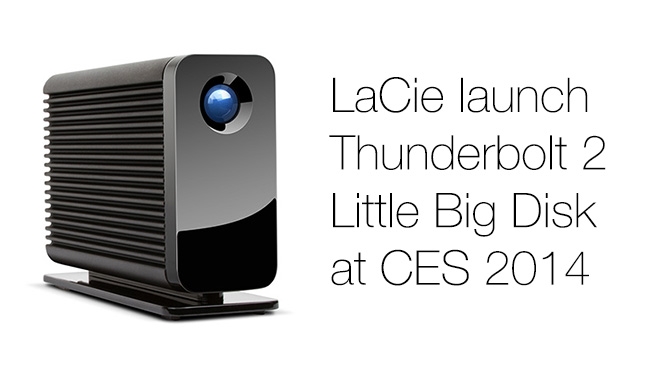 LaCie were one of the first storage manufacturers to embrace Thunderbolt connections and now they are launching their first drive with Thunderbolt 2 connectivity; the Little Big Disk Thunderbolt 2

The Consumer Electronics Show is in Las Vegas this week and of particular interest to Editors and Videographers using new Macs is the new Little Big Disk Thunderbolt 2 from LaCie, one of the first Thunderbolt 2 drives on the market.

LaCie's range of Thunderbolt connected drives have been very succesful so it was to be expected that they would add Thunderbolt 2 connectivity to their line up. The new Little Big Disk Thunderbolt 2 has two Thunderbolt 2 ports to allow for daisy chaining up to six devices and is fitted with 2 512GB SSD's connected via PCIe and configured as RAID 0 for maximum speed. This allows the drive to read data at speeds of up to 1375MB/s.The drive is also fitted with a temperature controlled fan that only runs if the drive gets too hot, so along with the silent SSD drives it is extremely quiet. Perfect to sit next to your nearly silent Mac Pro, especially as designer Neil Poulton has given the drive a glossy black exterior to match the Mac Pro.

With 4K now firmly established as the next big format it will be important to have fast portable storage like the Little Big Disk. As Thunderbolt 2 appears on more devices later this year it will be great way of capturing content in the field and then working with it on the road or back in the edit suite.

At CES, LaCie will be demonstrating how the Little Big Disk lets videographers work directly from RAW files, getting full image quality from footage and editing in real time. LaCie will show how professionals can capture 250 gigabytes of 4K footage on a Little Big Disk in the field, and then transfer the content to the post-production team in under 10 minutes.

At 3.3 inches high, 5.5 inches long and 1.6 inches deep and weighing just under one and a half pounds the Little Big Disk is easy to carry around. It comes with a stand and a matching black Thunderbolt cable (you don't normally find these included) and will have a 3 year warranty as standard.

Availablity is expected in the first quarter of 2014 but there is no word yet from LaCie on pricing.