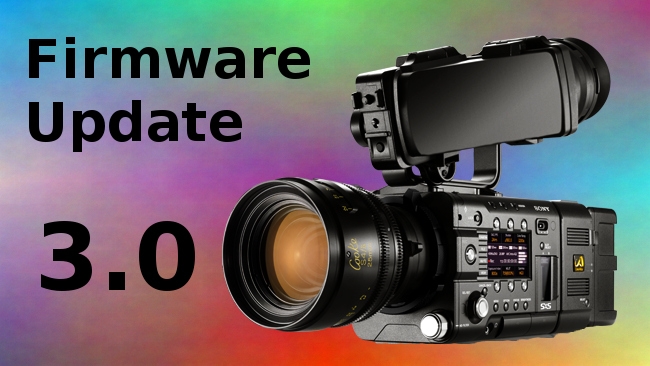 The Sony f5 and F55 instantly grabbed a place in peoples hearts immediately on release thanks to the fact they ooze style. Who wouldn’t want to be seen shooting on such a classy looking camera! However many features were not available at camera launch and have slowly found their way out into the wild via incremental camera updates and now Sony have released version 3.0 of the camera updates which finally makes the F5/F55 a force to be reckoned with.

I often find that version 3.0 of most software tends to be a good version, (maybe 3.1 for some minor updates). I don’t especially know why that is but it often seems to be the case and it would appear to be the case with this new firmware update for the Sony F5 and F55. The new update brings a whole cascade of new features to the cameras. Most people seem to be excited by the super16 sized sensor crop mode which much like 2K mode on the RED One, allows you to use lenses designed for Super 16 film cameras with the Sony F5 and F55 but it’s by no means the only significant new feature.

If you are shooting slow-mo footage in XAVC 1080p or 2k then the top speed is now 180fps up from 120fps in the last update. Sadly in 50Hz (PAL land) frame rates, the camera tops out at only 150fps. 180fps is the highest frame rate we were promised in XAVC mode originally but it would be great to have 200fps for those in PAL land too. Here’s hoping they might be able to push it just that tiny bit further in a future update.

There is an auto-iris function for those who want to really run and gun with the camera but of course it only works in conjunction with certain lenses that support it.

User definable clip naming is one of those features that people are not going to get excited about as it doesn’t affect the image but it will be a massive help when it comes to the edit I am sure. I suspect this is going to be a bigger feature than people will realise... until it starts getting used when people will realise just how helpful it is.

There is also a new S-Log 3 mode and a SGamut3.Cine mode. Apparently S-Log3 is a log signal with 1300% dynamic range, close to Cineon Log curve. S-Gamut3.Cine is the same as DCI-P3 which is the colourspace used in digital cinema projection. Sony are promising more information about these extra modes in the new year.

One big surprise is 720p MPEG HD recording (1280x720p). Supported frame rates are only 50.0P and 59.94P but even so, it’s a surprise to see this implemented, as on release I was told there would never be a mode lower than 1080p. (I was wondering about proxy recording). I’m guessing Sony is responding to requests from people working in U.S. TV where 720p is a common format for HD broadcast TV. That’s my guess anyway, but it’s very interesting to see this feature. I bet people will discover alternative uses for it too!

Something else Sony have snuck in with the new update is what they are calling XAVC QFHD. I assume the Q stands for Quad, as the 3840 × 2160 resolution is sometimes referred to as Quad HD. However the reason this is really significant is that is also the native resolution of UHD 4K TV. (Yes 4K TV is not actually 4K but don’t tell anyone!). This means you can record directly to the format and be ready for delivery to 4K televisions. Basic frame rates are supported: 23.98PsF, 25.0PsF, 29.97PsF, 50.0P and 59.94P.

In total there are 28 new features in the update! So this is definitely a special update!

So far version 3.0 seems much more stable than the last update, and the only quirkiness found so far seems to be an issue with audio levels on tracks 3 & 4 and RAW recording not being as lightning fast as it used to be. There is presently a short delay before recording starts but Sony are confident they will have this fixed by the next update.

By the way if you are following my software numerology theory then version 4 is usually the nasty one so I suggest you wait a short while when it arrives till other people have installed it and see what they have to say about it! ;) If you are not superstitious on the other hand, feel free to install it as soon as it arrives!

3. S&Q motion on XAVC 4K and QFHD
F55 is compatible with the Slow & Quick Motion when the recording format is XAVC 4K or QFHD. Available frame rate is 1FPS to 60FPS by 1 frame step.

11. RAW playback via F5/F55’s connectors
Playback signal of RAW recording on the AXS-R5 attached to F5/F55, can be output from SDI, HDMI and VF output on the PMW-F5/F55. Also selected MLUT is applied to RAW Playback signal.

12. Save and Load Lens file and Scene file via SD memory card
Up to 64 Scene Files and up to 64 Lens Files can be saved on an SD memory card. Saved files can be loaded to the internal memory.

13. Available Cine-EI operation on only SxS recording
Cine-EI mode is selectable without R5. During SxS recording only, you can do Exposure Index operation and change EI values.

14. New color gamut and Log curve
S-Gamut3.Cine is available and easy to adjust for digital cinema (DCI-P3). For detail information, please refer to the document “Introduction of S-Log3 and S-Gamut3.Cine” which will be posted in Beginning of January.

18. 100% Marker
100% Marker that indicates the effective picture frame is added.

19. Marker ON/OFF for each output
You can turn the marker On/Off for outputs such as VF and SDI/HDMI, independently.

25. Focus and Zoom Control
Focus and Zoom control functions are supported from RM-B170 when mounting Sony FZ Zoom lens SCL-Z18X140 or B4 lenses which are supporting Auto Iris with LA-FZB1 or LA-FZB2, FZ-B4lens mount adapter.

1. Rec Tally of F55/F5 and R5
On RAW Recording, actual starting recording is delayed from lighting F55/F5 Rec tally. Make sure to check R5’s tally if RAW recoding is started or not. It is synced with RAW recording correctly. We will fix it in the future.

2. False Color on Cine-EI mode
In the case of attaching DVF-EL100 and DVF-L700 which has False color function and the case that V3.0 of F55 and F5 “SDI(Main)&Internal Rec MLUT” is Off on Cine-EI mode, False color function works even if any tone curve is selected. In previous version, False color works on S-Log2 selected. When you select other tone curve and use False Color in this version, please take care it. We will fix it in the future.