High frame rates have been mauled by the critics. But should we go even higher? 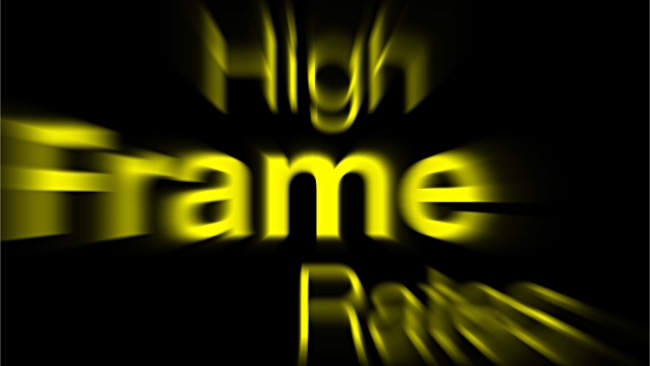 Is this the end of HFR, or just the beginning? Simon Wyndham explains

Quite recently a certain film director called Peter Jackson decided that he would make a film using a new technology. Only it wasn’t really new technology, it has been around for a long time.

I'm referring to HFR (High Frame Rate) filming. The movie in question was The Hobbit and it was hailed as a big leap forward. No longer would audiences put up with the rather antiquated 24 frames per second (fps) that had until now been the staple of pretty much every film ever made. Or so Mr Jackson thought.

Filmed at the heady speed of 48fps, the general reaction to The Hobbit when projected at that speed was rather negative to say the least. Accusations flew that it made the film look like a cheap 1970’s BBC television play. The sets and makeup took on a rather fake look too. In essence it prevented the audience from being able to suspend their belief and become connected in some way to the fantasy world that they were seeing.

Not surprisingly there aren't many other filmmakers who are rushing to film their movies in this format, despite the support of directors like James Cameron.

So, is HFR's time up? I don’t believe so. My own feeling is that HFR could suit a wide variety of subjects. Maybe HFR doesn’t suit a period fantasy such as The Hobbit, but it could perhaps suit a high tech science fiction movie, or even a gritty piece based upon true events, such as a film about the Afghanistan conflict that could be filmed semi-documentary style.

HFR would lend those sorts of films a certain amount of reality. I think that this is the key to using HFR. If you want your film to seem more real then use HFR, but if you want dreamy fantasy such as The Hobbit then 24fps would be more in keeping with that type of story.

The question still remains about whether or not audiences will accept HFR in any form after the general reaction to The Hobbit. Personally I do not think that the technicians aimed high enough. 48fps is too close to live television and news. What is needed is a push for even higher framerates that can bring something new to the party. 120fps minimum is what I would be aiming for.

I believe that HFR will become more acceptable as long as the studios push it. It is a cultural thing. The modern gaming generation will be more forgiving of such things because they have grown up with HFR cut scenes in their video games such as Call of Duty, as well as high frame rates during the actual gameplay. These gaming cut sequences are made to look cinematic, but often use the actual game engine unlike times of old where cut scenes were usually pre-rendered at lower frame rates due to the lack of computing horsepower.

To further illustrate how frame rate acceptance is cultural it should be pointed out that in countries like Japan the smooth interlaced look is much preferred over low framerate progressive scan footage, which is regarded as quite antiquated. This goes some way to explain why it took so long for us to get progressive scan modes on our video cameras. The manufacturers simply couldn’t see at the time why on earth we would want it!

While I can fully understand where the stalwarts are coming from in their resistance to HFR, I do still believe that 24fps is antiquated and restrictive. If you ever get the chance I would recommend filming some 1080i footage followed immediately by some 24/25fps. Your eyes will quickly tell you just how bad the low frame rate formats are!

As I alluded to earlier, one of the main complaints about HFR is that it takes people out of the fantasy world of the film and grounds them firmly in reality. However I believe that instead of taking such a complaint as read and applying that theory to all films in a blanket fashion, we should instead be looking at what types of films HFR would suit. Especially in cases where you would want the film to seem very real.

All that 4k resolution that is now being foisted upon us is going to waste due to the blur created during motion. The best way to solve this is to shoot at ultra high framerates using a fast shutter. Only then can we really start to take advantage of the resolution that is available to us. I believe that the introduction of ultra high framerates will be as big a leap as from black & white to colour, but also that it should be seen as a tool that can be used selectively.