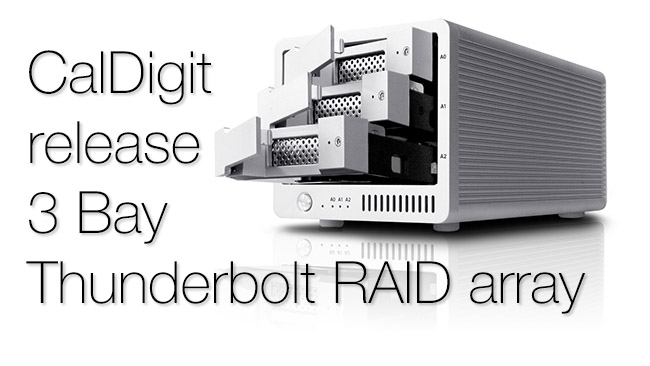 CalDigit are about to start shipping their new Thunderbolt connected RAID array, the T3, which can be fitted with three Hard drives or SSDs and can reach speeds of up to 850MB/s

Building on the success of their T1 single bay arrays and T2 dual bay arrays CalDigit have announced that their new T3 three bay RAID arrays will begin shipping from January 6th 2014 and are available for pre-order now.

The T3 is a three bay Thunderbolt connected RAID chassis which can be fitted with Hard drives, SSDs or even a combination of the two. The drives can be configured as RAID 0, RAID 1 or JBOD or you can have two drives in a RAID configuration and the third drive as an individual drive unit for maximum flexibility.

The T3 can be configured with 2TB, 3TB or 4TB hard drives to give 6TB, 9TB or 12TB of storage depending on the RAID configuration. With SSDs the current maximum is 2.88TB but that should increase as higher capacity SSD's arrive in the market.

Housed in a smart extruded aluminium chassis the T3 has two Thunderbolt ports so up to six units can be daisy chained together giving up to 72TB of capacity or they can be linked to other Thunderbolt devices.

The drive modules of the T3 are removable so it is simple to swap drives and in fact it uses the same drive modules as other CalDigit arrays so making it easy to move drives from one system to another.