A new era for media professionals: the new Mac Pro is available to buy 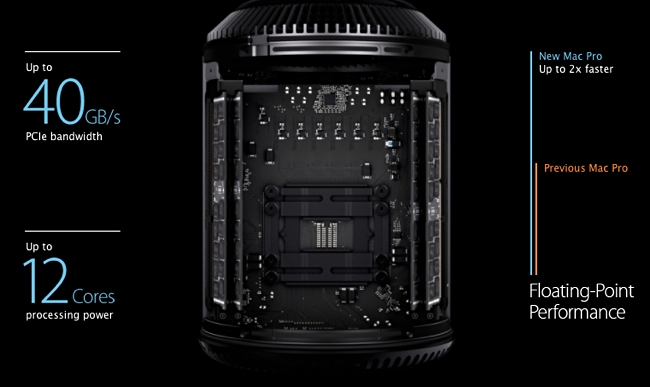 We've just heard that Apple is launching its new Mac Pro tomorrow. This is quite possibly the most important computer to burst onto the scene for the video community for at least a decade. Starting price: $2,999

While there have been other significant advances in the form of Apple laptops and iMacs, these have been improved incrementally, whereas the new Mac Pro appears to be a giant leap, but to where, exactly, isn't known yet.

With a completely radical form factor, occupying a small fraction of the space of the previous Mac Pro, there are pluses as well as minuses. The jury is still out as to whether the new shape will help or hinder professionals.

How did Apple arrive at a product to replace a system whose upgradability was right at its core, that isn't upgradable at all? With a degree of arrogance verging on madness, is how you can sum up the views of many incumbent Mac Pro users. But others - we don't know how many, but I'm one of them, think the inclusion ample Thunderbolt 2.0 ports, and two on-board extremely high performance graphics systems, means that this new pint pot has more than enough potential to find its way onto the most demanding of desks.

We'll be testing this the minute one lands on our desks. We'll take a week or so to test it, and then we'll let you know how it shapes up with software like Smoke and Resolve.

Meanwhile, here's the pick of RedShark's coverage of the New Mac Pro.

Should you buy the new Mac Pro or an iMac?

Is Apple still snubbing professionals, or is the new Mac Pro a genius way to win them back?