Video is changing how we see history 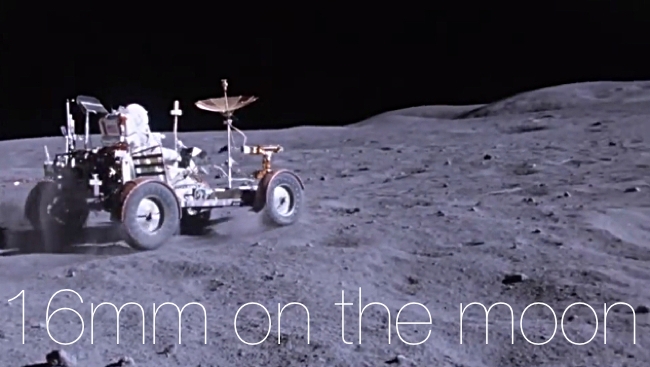 Wouldn't it have been fantastic if the Apollo astronauts had been able to take 4K cameras with them. If they went on a moon mission today, they undoubtedly would have. (Probably 3D as well!).

But they didn't. All they had was a few highly bespoke and decidedly low resolution TV cameras and some 16mm film devices.

Which is great news, because recently the 16mm material has been through a high definition transfer, and it's available for everyone to see.

After the break, there's a short clip of the moon rover being flung around the lunar surface. It all looks a bit hair-raising, but remember that there's only 1/6th of the gravity up there.

And it's worth reflecting that just in the few decades since the moon landing, our ability to record history has grown exponentially, to the point at which a large proportion of the population has an HD camera in their pocket, that can "broadcast" pictures to the entire planet within seconds. (A trend that started when an airliner crash landed on the Hudson river and pictures flashed around the world before the news networks even knew it had happened).

Not out of date

Another thought: this pictures don't look a minute out of date. Admittedly there are fewer cultural references on the surface of the moon than, say, in Carnaby Street, but when was the last time you saw an old fashioned-looking moon rocket? These things are so far outside of our normal frameworks that they don't age, any more than the shape of Concorde looks jaded.

In future, history will be filmed and viewed from every angle. There will be no escape.

See an HD transfer of moonwalk footage after the break