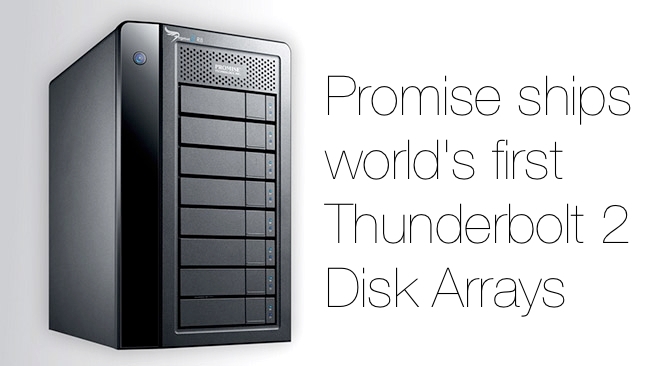 Promise were one of the first storage companies to produce a Thunderbolt connected RAID arra,  and now they have started shipping the worlds first Thunderbolt 2 RAID arrays

The Promise Pegasus Thunderbolt RAID arrays have become a familiar sight in edit suites and on location connected to MacBook Pros via Thunderbolt. Now Promise are shipping Pegasus2, with Thunderbolt 2 connectivity, just in time for the new Mac Pro.

The Pegasus2 RAID arrays are available from the Apple web store and other retailers with recommended pricing as follows:

Promise are also launching an updated SanLink2 adaptor to allow two Fibre Channel connections via Thunderbolt 2 at up to 8Gbps. This will allow the new Mac Pro to be connected to storage arrays like the Promise VTrak series over Fibre Channel.