Loadsa Lenses and IR Night shooting on the GoPro Hero 3 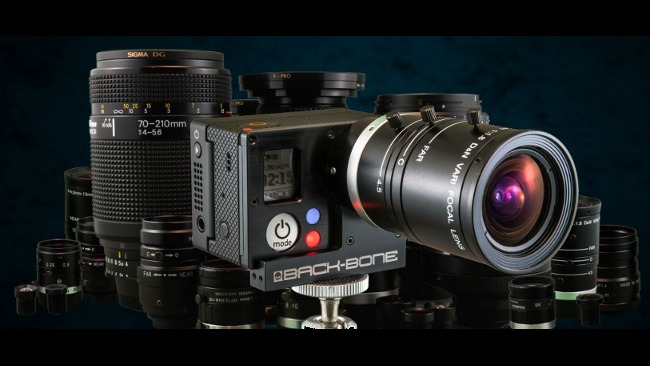 Ribcage GoPro with lots of lenses

The modding ecosystem around the GoPro cameras is growing

We looked before at mods for the GoPro series of cameras to make them more versatile and "cinematic" and now there is a new modification that looks a lot more accessible and versatile than the previous options. It’s called the Ribcage and it’s from a company called Backbone. The idea is similar to the Novo series of cameras but those were only available for rental. Backbone are making available their GoPro mod as both a kit and as modified GoPro Hero3+ Black cameras.

The Backbone Ribcage system adds a lot of new features, there are 3 new lens mounts included in the modification right away: M12, cs-mount or good old versatile c-mount. Obviously there are loads of readily available lens adaptors for c-mount, so you could add Nikon mount lenses etc too through the use of an adaptor. You are limited to manual lenses as it is a dumb mount.

Check out this video of the modification in action including some nice macro shots:

The Ribcage also makes the IR filter optional making it possible to shoot night vision style with an additional IR light (which you have to supply yourself). You can choose to have the IR filter permanently mounted or removable. Lastly the system also finally adds a proper tripod mount to the camera that is easily removable. That must be a very basic item people have wanted on the GoPro series of cameras for some time.

The Novo still has a couple of advantages being even more tiny than the Ribcage setup and most of all featuring custom electronics that disable the auto exposure functionality in the camera. However it has the major disadvantage of only being a rental item which I’m sure will be very off-putting to some people.

Not for the faint hearted!

The kit is not for the faint hearted what with all the use of ribbon cable and adhesive tape within the camera. The camera has to be heavily disassembled and in the demo video it takes someone experienced at the job a full 7 minutes to just take the camera apart. It looks very do-able tho as long as you take your time and slowly proceed repeating the mantra, “my actions are like those of a feather”. Anyway it isn’t quite as simple as slapping a new front onto the camera but if you slowly take your time and are of a gentle persuasion...

The video after the break gives you full details on how to take apart your GoPro and add the modification:

Price is $199 for the kit (which can be added to both the GoPro Hero 3 Black and the newer plus model) and $799 for an already modified GoPro Hero3+ Black. There are pre-orders available right now with full manufacturing expected in early 2014. For more details check out the Backbone website.